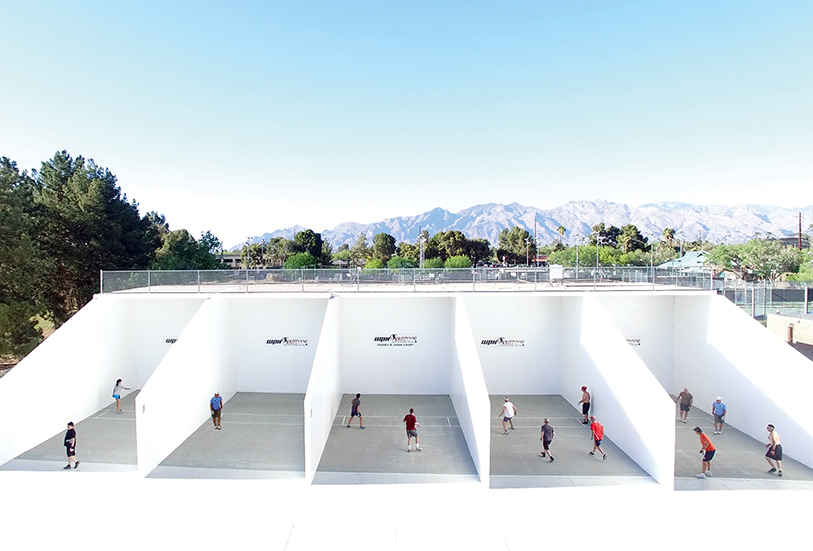 A special thank you to Scott Cleveland, Jim Verhaeghe and Russ Whitten for providing special Ole Pueblo hospitality (taco bar!) for the event all day Saturday.

With temps staying in the low 90s and partially sunny, players enjoyed ideal conditions the entire weekend–many enjoying the warm respite from the winter weather back home. San Diego Handball  was well-represented on Championship Sunday.  Bobby Nicholas played some of the best handball of the weekend, winning each of his divisions–the only player to achieve the feat and win his 10th Masters Division National title.

The first match of the day featured Dan Zimet and Bobby Nicholas against Southern California’s Tommy Valenzuela and Jim Ramirez in the Golden Masters (50-plus) final. Both teams brought tremendous athleticism and shot-making ability to the contest. Valenzuela brings a dangerous serve-and-shoot game with an equally talented Ramirez playing the right side.  The combination of Zimet along with Nicholas proved too much for any team to handle. Zimet darted across the front court while a relentless Nicholas blasted the ball seemingly from anywhere he could set up. After dropping the first game, Valenzuela and Ramirez made a late run in the second, trying to extend the match to a tiebreaker. Zimet and Nicholas answered their opponent’s rally by regaining the serve and closing out match point, 21-12, 21-18.

In the Diamond Masters (70-plus) final, Gary Eisenbooth (CA) and Bob Dyke (VA) could do no wrong in the first game, while National Three-Wall finalists, Ed Campbell (CA) and Tim Murray (FL) couldn’t find their rhythm early. It produced a lopsided 21-1 result that indicated the final may come to a quick conclusion. The second game was slug-fest, with Campbell being more aggressive while Murray dug deep to power drives against their opponents. Dyke and Eisenbooth answered each point, keeping the game in doubt before Campbell asserted his will and helped his team force the tiebreaker, winning 21-19. The long second game didn’t help their chances in the tiebreaker, as Eisenbooth and Dyke secured the title with an 11-3 victory.

In the Veteran Diamond (75-plus) Round Robin decider, Rob Nichols and Art Brooks played the spoilers to Jim Smith and Bob Bardwell’s title run indicating why EVERY match, game and point in a round robin format can be crucial. Brooks was a late substitute partner for Nichols on Friday afternoon just before play began. On Sunday, Bardwell and Smith began the day in first place after their tiebreaker win over Dave Ackerman and Peter Anderson the day before.

Nichols and Brooks dropped their first match on Friday to Ackerman and Anderson in two games. On Sunday, they looked like a different team.

“We played loose and didn’t think about any outcome on the leader board.” Nichols stated.

Nichols stayed off his heals and attacked the ball, converting most of his shots into kills or passes. Brooks played well up front, retrieving or rekilling the majority of shots hit his. While the teams traded wins by the exact score in the first two games, Nichols and Brooks built a 9-4 lead in the tiebreaker before sealing the win, 13-21, 21-13, 11-7.

Both Ackerman and Anderson politely showed up Sunday morning, thinking they were only making an appearance for a runner-up trophy and picture; however, they earned the championship by virtue of the round robin tiebreaker format. Their title was determined by Rule 5.9.(3) Fewest Games Lost tiebreaker. Nichols and Brooks secured second place by virtue of the head-to-head result against Bardwell and Smith.

The Senior (35-plus) final saw the match’s momentum continually shift for each team. Bill Mehilos and Adam Szatkowski survived a game one blitz from brothers Adam and Dan Zimet, (21-2) to turn things around in game two by building a big lead. But the Zimet brothers didn’t concede easily, mounting a comeback to nearly even the score before Mehilos and Szatkowski forced a third game, winning 21-17. Things stayed close in the tiebreaker, with both teams playing to a 9-9 tie before Mehilos and Szatkowski notched an 11-9 win.

The Super Masters (60-plus) didn’t go to three games, but it was by far the closest match of the day. Scott Walker (OH) and Lloyd Garcia (WY) battled San Diego’s Marc Penick and Bob Nicholas in two marathon games. Penick and Nicholas prevailed, winning 21-20, 21-20, with Nicholas dramatically ending the match with a 50 foot rollout kill–a fitting end for his second doubles title of the day.

Finally, the Veteran Super (65-plus) final was between current Three-Wall Champions Bob Bardeau / Phil Kirk (OH) against Lloyd Garcia / Bob Paulsen (WY/CO). Garcia and Paulsen have played well against the pair from Ohio, but Kirk and Bardeau pulled away late to close a tough back-and-forth first game, 21-15. In the second, Kirk and Bardeau hit their stride to take the final, 21-5.

Thank you to all the players and supporters who made this event happen. It was an incredible collaboration with the WPH, and we hope to offer it again next year!