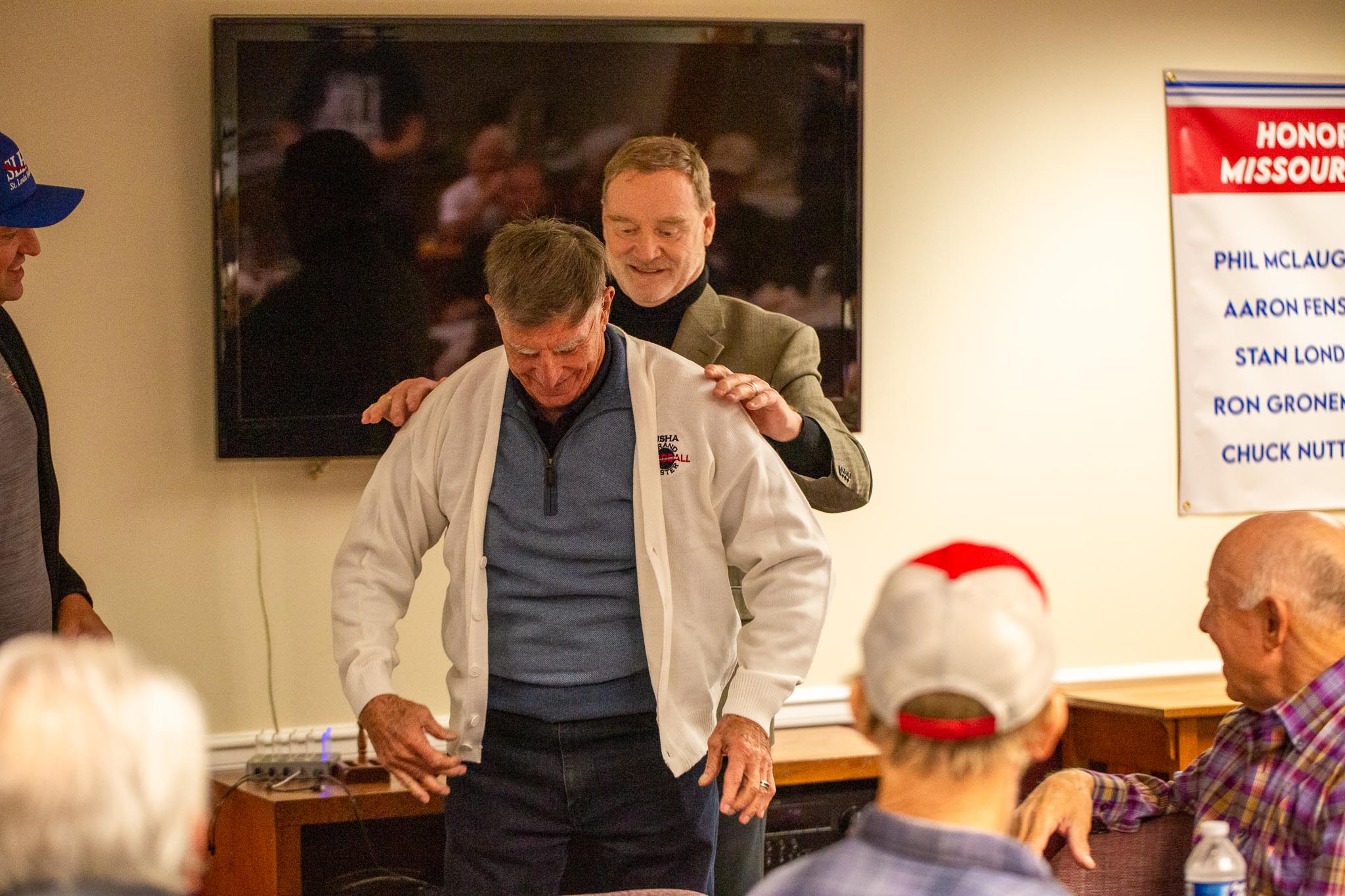 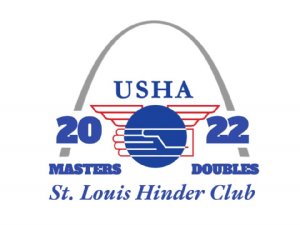 ST. LOUIS — Sunday at the Hinder Club was filled with many exciting finals matches and terrific handball.

One of the first matches of the day was the 35 doubles final between Kevin Pettus/Will Lemp and Jeff Streibig/Ryan Willis. All four players play at a high open level and it showed on the court. The teams split the first two games to force a tiebreaker. Streibig and Willis jumped out to a 7-3 lead, but they would score no more points after that. Kevin Pettus became red hot at the end of the match, rolling out several shots to earn his team the victory.

Gary Scogin also had a day to remember, winning two national titles on Sunday, one in the 60+ and the other in the 65+.

His first match was in the 65+, where he teamed up with his long time partner Lloyd Garcia to take on Scott Rosenthal and Kevin Jarvis. Scogin and Garcia have not lost a match together in their age division for several years, and Sunday was no different. Scogin and Garcia defeated the Illinois duo 21-16, 21-10.

Scogin then teamed with local favorite David Streibig to win the 60+ doubles over Jake Esser and Jim Lewis in two straight games, 21-4, 21-12.

The players and spectators who traveled to the tournament were amazed by the Hinder Club, the only exclusive Handball Club in the country. The hospitality was tremendous throughout the weekend.

A huge thank you to Eric Hillgren, David Streibig, Jeff Streibig, Mike Benkleman, Gary Hughes, Jim Ward and the many more St. Louis ambassadors who made this tournament so great. If you haven’t made it to the Hinder Club yet, make sure to add it to your bucket list.

See all the winners of each division below, and check out the full brackets HERE.

ST. LOUIS — The finalists for all divisions were decided on the second full day of action in the Masters Doubles.

As matches concluded, players and family gathered in the upstairs lounge where Tucson’s Vince San Angelo was honored and awarded his Grand Masters sweater, an honor for those who win at least 10 age division titles.

USHA President Denis Hogan presented the sweater to San Angelo, who shared with those gathered, “This journey started 19 years ago. It’s tough but glad players have a goal to chase.” San Angelo will be playing for title number 11 on Sunday with partner Bob Braine. 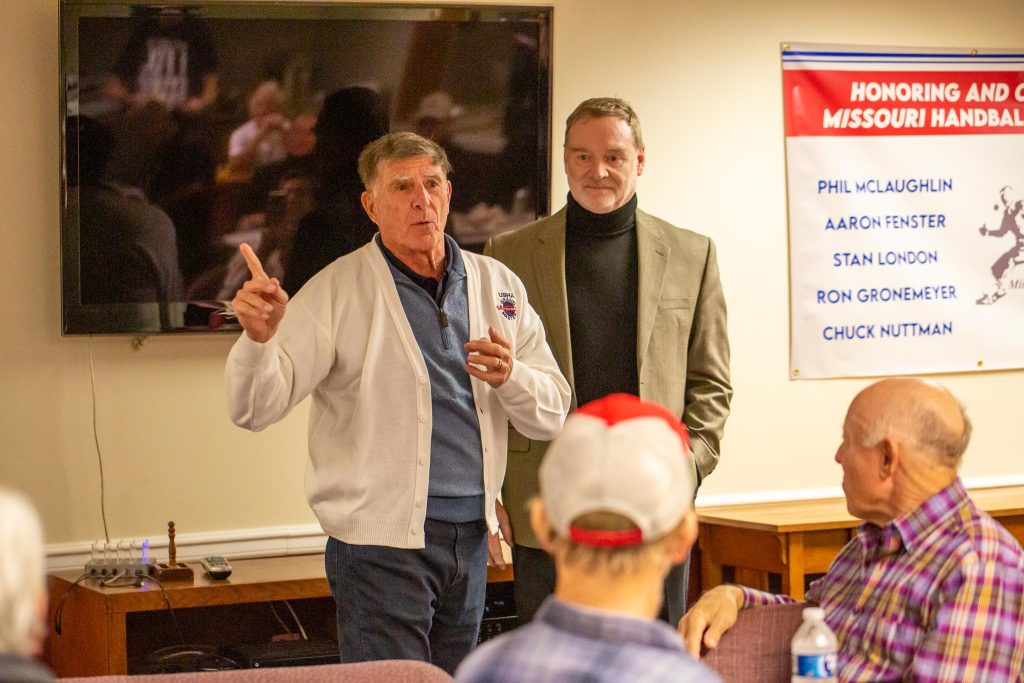 USHA President Denis Hogan presented the sweater to San Angelo, who shared with those gathered, “This journey started 19 years ago. It’s tough but glad players have a goal to chase.” San Angelo will be playing for title number 11 on Sunday with partner Bob Braine. 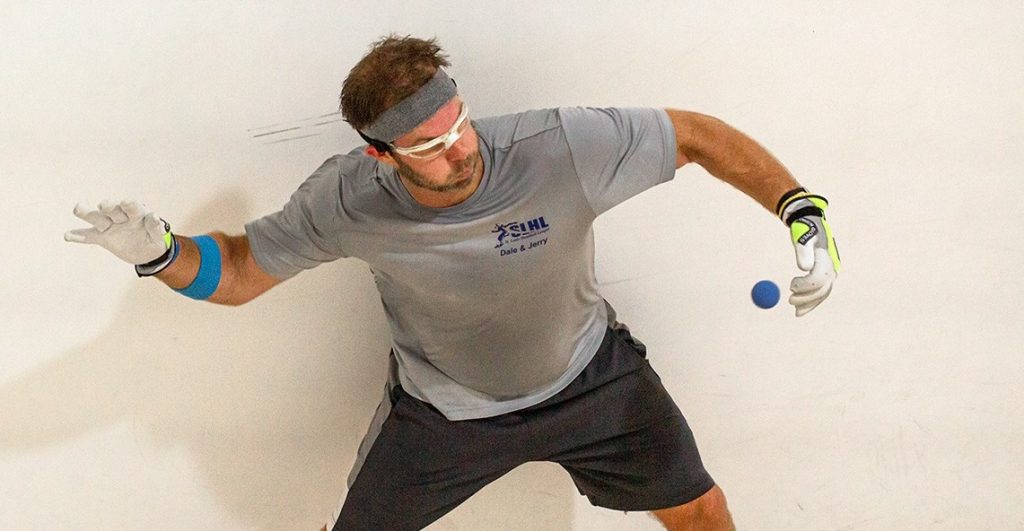 ST. LOUIS — The 2022 USHA Masters Doubles hosted by the Missouri State Handball Association started off with a nail-biter Friday afternoon at the St. Louis Hinder Club.  Peter Anderson (Spring, Texas) and Bob Miller (Sunrise, Fla.) kicked things off against the California duo of Jim Smith and Dave Ackerman in the 75-plus Doubles. After splitting the first two games, the foursome were locked in a back-and-forth affair in the tiebreaker. At match point, team Smith/Ackerman gained the crucial sideout and were able to snatch the 11-10 victory.  Anderson and Miller are not eliminated, and will still be competing in round robin action throughout the weekend.

In 35-plus action, tourney director Eric Hillgren stepped away from the tournament desk to pair with partner Richard Lynch against David Elkin and Shane Conneely. Home court advantage came into play as the Hinder Club team stormed back from a second game route to win, 21-20, 7-21, 11-9.

Mostly, on the first day, out of town players were abuzz about the beautiful St. Louis Hinder Club. With over 120 members, the club is a “handball only” facility, with seven courts (one side glass exhibition court), fully equipped locker rooms (steam room, cold plunge and jacuzzi), and a bar lounge.

“What an awesome place!” exclaimed Gary Scogin of Austin, Texas.

“We’d love one of these (clubs) in every city,” said USHA board member, Rob Nichols. “It’s a great spot where handball always takes priority.”

ST. LOUIS — The Missouri State Handball Association and USHA present the 2022 USHA National Masters Doubles, held at the St. Louis Hinder Club. Over 100 players have entered this doubles event, featuring players from ages 35 to over 80.

A Pro Invitational Singles bracket brings some of the best players in the world to this “handball exclusive” club. First and preliminary rounds begin Friday at 1 p.m. with tournament check-in at Noon.