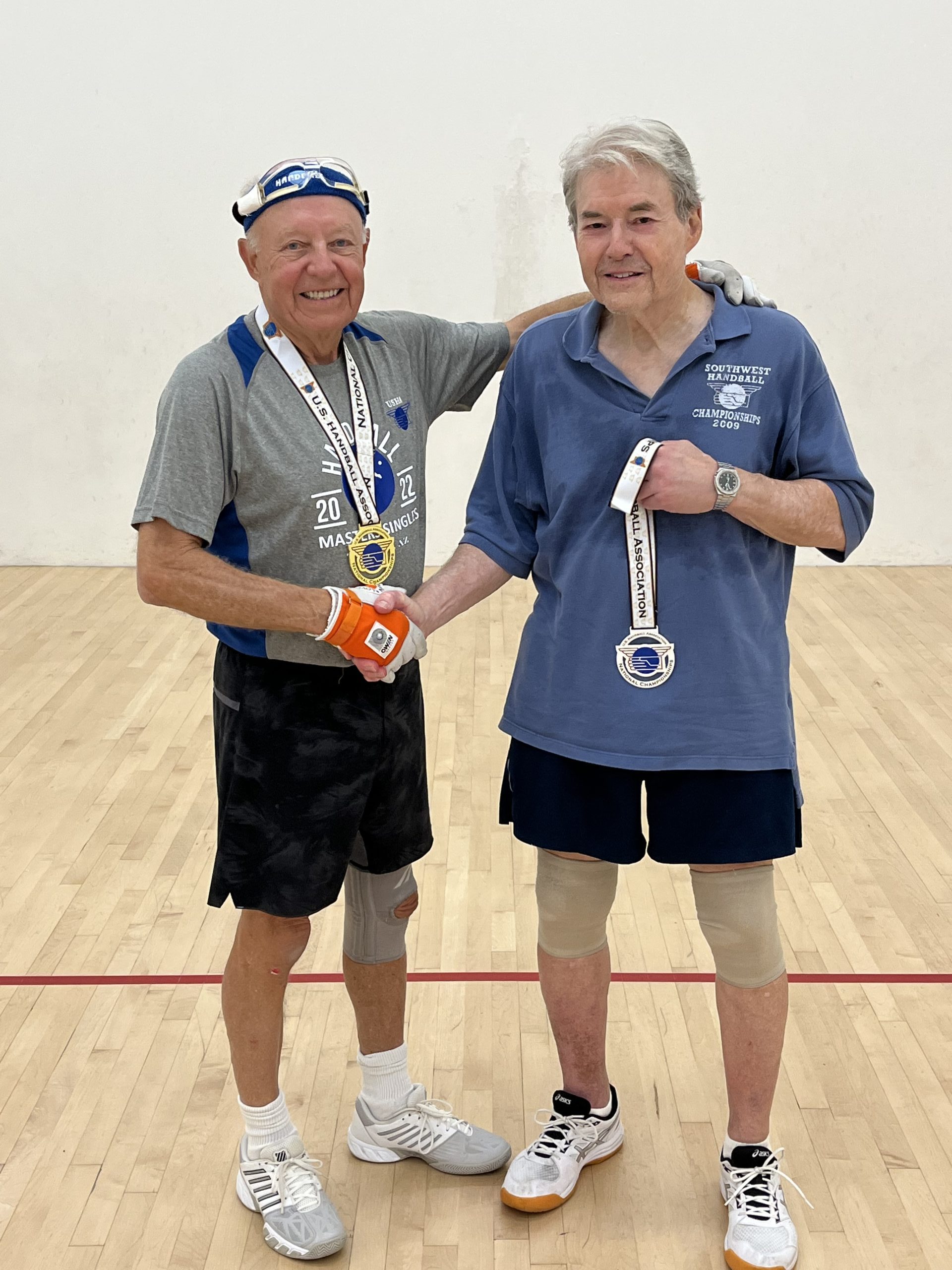 TUCSON — The 2022 Master Singles wrapped up Sunday afternoon after a morning of well played and exciting finals matches.

It’s hard to pick what was the best match of the day, as nearly all of them were thrilling and showcased handball at it’s best at each age divison.

Congratulations to Karl Lady on winning his first national title in the 80 singles division over Wayne Neumann. Lady has come close to winning before, and played fantastic this weekend to get over the hump.

Greg Raya outlasted Jim Ward in a tiebreaker to add another national title to his collection in the 75 singles final. After dropping game one, Raya dominated games two and three.

Ed Campbell and Merv Deckert put on another phenomenal final, with both players defying their age on the court. Campbell won in an 11-9 tiebreaker, and found a left lob serve late in the match that made the difference.

Juan Canales Sr. just outlasted John Henning in the 55 singles final. Canales fought off game point twice in game one, and won the second game 21-11. Canales used his speed to track down everything and wear down Henning.

Alex Garcia defeated Raul Jasso in two extremely well played games. Garcia’s crack serve down the right came up clutch when he needed it the most.

Thank you to the Tucson Racquet Club and all the players who competed in the tournament. It was a great weekend filled with great matches.

You can view all of the results from the tournament HERE

TUCSON — Saturday was another day full of entertaining matches at the 2022 Master Singles in Tucson. We also crowned our first two champions of the weekend!

Shorty Ruiz won the 35 singles division in two straight games over Jorge Lopez to earn his second age division national title, with the first one coming at the Four-Wall Nationals in Portland. He has his sights on becoming a Grand Master (10 age division titles) before he reaches the age of 40.

Rudy Guzman claimed the second title of the day by defeating Rob Birrell in the 60B finals. Guzman hits the ball with great power and has a deadly fist pass shot that earns him points routinely. Guzman will also play Sunday in the 65 singles final against Daniel Brennan

The match of the day was played between Idaho’s Chris Tico and California’s Alex Garcia in the 45 plus division. Garcia closed out game one strong to win 21-16, but got dropped in the second game 21-7 by Tico. It looked as if Tico was going to win the tiebreaker as well when he jumped out to a 7-0 lead. Garcia battled back, and ultimately sided out Tico at match point and came in the box at 8-10, and was able to score the final three points of the match to win 11-10.

Garcia will take on Raul Jasso in the finals tomorrow who also won in a close tiebreaker, his over Sean Haley 11-9. 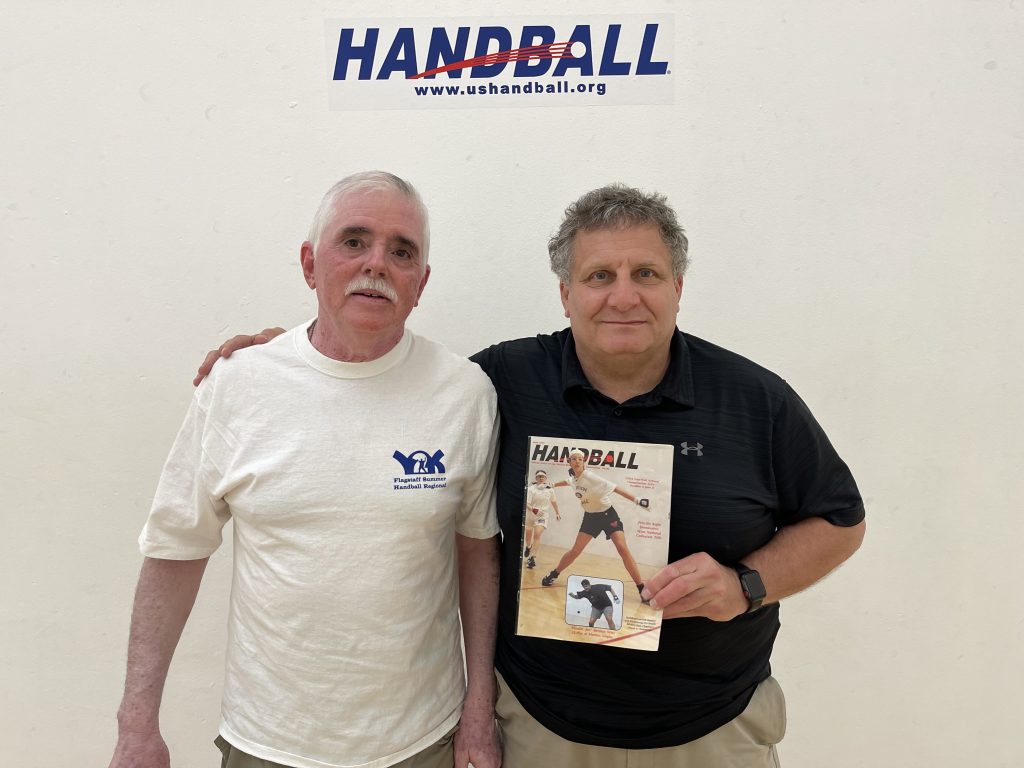 Joe Berman (Right) and Pete Dominguez (left) pose holding a 1997 Handball Magazine featuring Berman on the cover (under Priscilla) after winning the 35 Master Singles. The same year Dominguez won the 40B division. 25 years later they are still competing and back for more!

TUCSON — The USHA Master’s Singles kicked off Friday afternoon and immediately got off to an exciting start! The first match of the day was between John Goranson and Rob Birrell. After dropping game one 21-12, Birrell just edged out Goranson in game two to win 21-19. He kept that momentum rolling into the tiebreaker, and took victory in the final game 11-6 with a full crowd watching.

That match set the tone for the day, as we saw many tightly contested matches after that. Sean Haley overcame Fausto Castro in a two hour marathon tiebreaker match to advance to the semifinals against Shorty Ruiz in the 35 division.

After dropping game one badly to Mike Lockhart, Grey Raya hit a couple beautiful pass shots at the end of game two to force a tiebreaker. Raya didn’t let up in the breaker, and knocked out Lockhart in another thrilling match.

Play kicks off at 9am PST on Saturday. The 35 division and 60b division will be decided. Make sure to follow along with the action HERE

TUCSON — The USHA Masters Singles Invitational is set to kick off on Friday, Sept. 30–the first one held since early 2019.  First and preliminary rounds begins Friday afternoon at the Tucson Racquet Club.  Draws for the 2022 Masters Singles are available!
(First match is at 3 p.m.)

Please Note: Draws and times may change, so please review your start times up until the start of your event.

Hospitality will be provided at the Tucson Racquet Club, starting Friday evening. Masters Singles celebration dinner will be held Saturday at the in the Rillito Room at the Club.

After dinner, there will be a Saturday Night Reception at the Handball Hall of Fame!  Players and families are welcome to attend and enjoy the museum while catching up with friends.