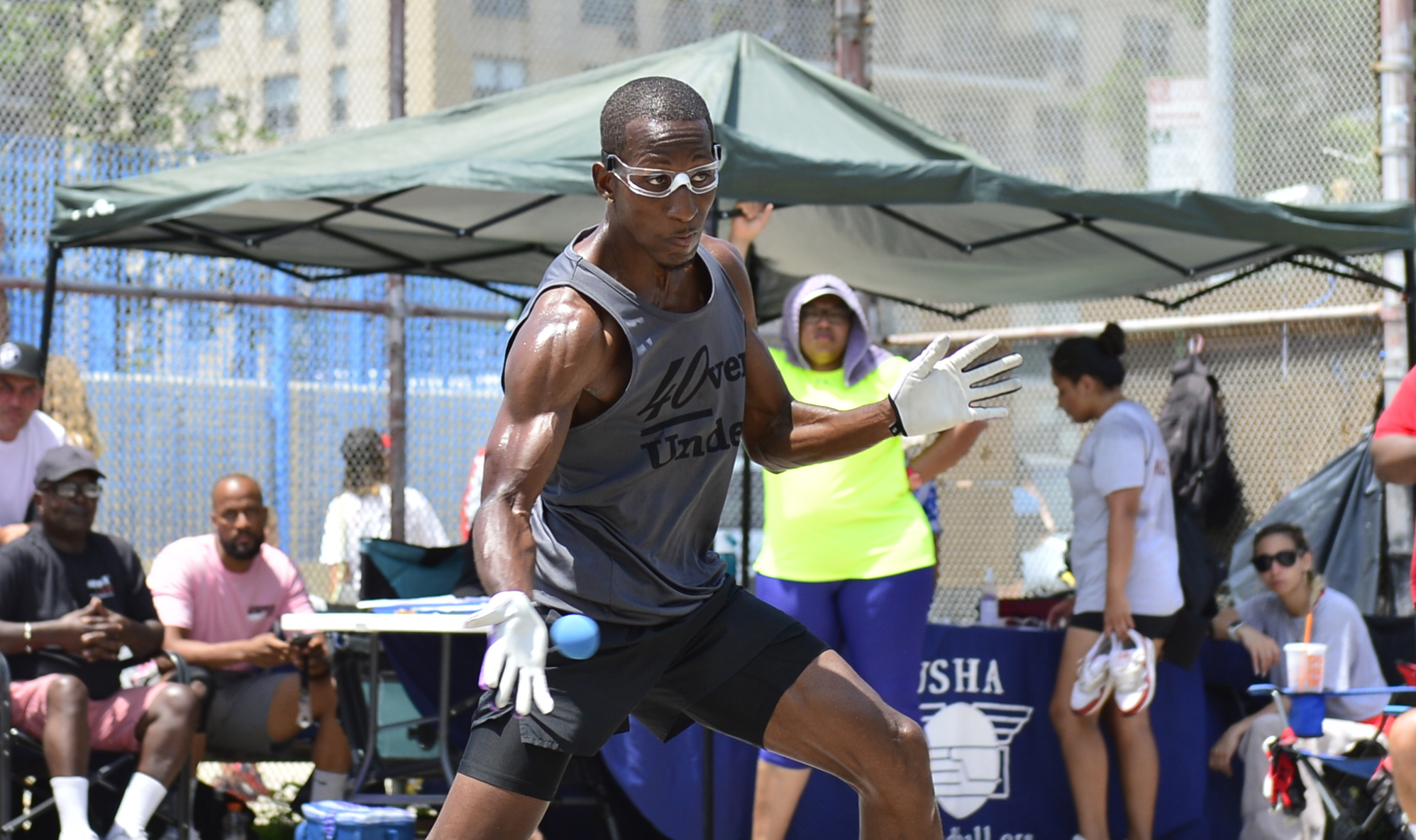 The score did not indicate how close the final was between the two competitors. Garcia jumped out to a fast start, surprising Cook and the hundreds gathering around to watch the action. Making the most of his first singles final appearance, Garcia kept Cook guessing by mixing up serves down the right line and killing Cooks returns for a 7-0 lead. Cook is no stranger to high pressure matches, and he quickly rebounded—giving Garcia an ace serve down the right line to start an incredible scoring 13-1 scoring run.

At 13-8, Garcia fired a shot from the deep right court that looked like an easy kill, but Cook made an amazing diving return for a rekill to gain the sideout. From that point, Cook kept up his torrid pace until he earned championship point.

Cook had defeated Hector Velez 25-15 in the semifinals, while Garcia advanced with an injury default win over Sacha Kruithof Perelló.

After winning the singles title, Cook had a chance to slam paired for the first time with Nazir Marston against Timothy Gonzalez and Allan Sanchez in the Men’s Open Doubles. Sanchez and Gonzalez, two-time Wallball Doubles champions (2015 & 2017), took down Cook and Marston in a back-and-forth affair, 25-18.

Early on, Cook and Marston appeared on their way to a championship, building a 15-10 lead, but Gonzalez and Sanchez kept chipping away. Sanchez anchored the team on the right side while Gonzalez traded shots with Cook on the left.  At 15-15, Cook committed an avoidable hinder by stepping into Gonzalez’s shot. Cook didn’t argue with referee Larry DuBois’s call but used a time out to try and stop their opponent’s momentum.

With a 16-15 lead, Sanchez and Gonzalez seemed more relaxed and focused, taking high percentage shots and placing all the pressure on their opponents to a 25-18 win.

In Sunday’s other finals, Tyshawn Morante and David Castro put on a clinic in the B Doubles, defeating Nicholas Pappas and Mohamad Mansi, 25-5.  After their doubles win, Morante and Castro faced off in the B Singles final, with Morante shooting to a 25-13 victory.

Cesar Sala and William Polanco outlasted George Figueroa and Ray Lopez in a marathon final to win the 40-plus doubles, 25-23.

Thank you to all the players who made this year’s Wallball Nationals a success! A special thank you to Jared Vale, Alethia Mendez-Caba, Milton Jones, Karen McConney and everyone on the One-Wall Committee who helped at the desk, keeping matches rolling to make this a great event for the players. Lastly, a huge thank you to Shenta Pizzaro, who anchored the check-in desk, results and printing.

CONEY ISLAND – A steady stream of beachgoers and wallball fans flowed into the Seaside Handball Courts near the cross streets of Surf and West 5th Avenue as temperatures began to rise into the low 90s. Play began for all other divisions for the 14th USHA Wallball National Championships after the B Singles and Doubles opened competition on Friday.

Jenny Qu (Flushing) proved to the class of the Women’s Pro divisions this summer. Facing Danielle Daskalakis in the singles final, Qu bolted to a 9-0 lead, keeping her foot on the gas paddle to win the title convincingly, 25-7. Qu’s plan was to stay aggressive, while resisting every effort from her opponent to work her way back into the match. While Qu played flawlessly, Daskalakis struggled to find a consistent rhythm that’s carried her to so many titles.

Qu’s day was far from being done. Pairing with Daskalakis in the Women’s Pro Doubles, they reached the final to face the phenomenal sister duo from Brooklyn, Melanie and Jessinia Gerarte. The championship match featured some memorable momentum swinging shots from each team with Qu and Daskalakis defeating their opponents, 25-21. Qu’s hot shooting from the singles final carried over to the doubles as she controlled the court, building a 20-10 lead. But the Garate sisters found a new gear, pushing the pace to come away on the winning end of some amazing rallies. Even a timeout by Qu/Daskalakis couldn’t stop the Garate sisters’ push as they went on an 11-0 run to take a 21-20 lead and sway the final in their favor. Daskalakis and Qu answered with slick pass down the right line to gain the side out. With the serve back, Daskalakis and Qu made a final push to reach championship point to complete Qu’s slam.

The Men’s Pro Division attracted more international* participation this year in the event’s history. The U.K.’s Luke Thompson and Spain’s Sacha Kruithof Perello were evidence that the world is indeed catching up to the talent of the nearly untouchable crop of players from New York.

Thompson won his first match and nearly upset No. 5 seed David Velez in a close contest in the round of 16, losing 25-23.

On the other side of the draw, Sacha survived the wicked serves from Christian Renville, winning 25-18 for a quarterfinal match with No. 2 seed, Timbo Gonzalez—a match that drew the biggest crowd of the day.

Seemingly immune to grueling heat and fast pace, Sacha demonstrated exceptional athleticism, hustling to each side of the court to kill or rekill Gonzalez’s shots. While Gonzalez kept the match within reach, Sacha wouldn’t be denied a trip to the semifinals, netting a 25-21 victory. Semifinals begin Sunday morning at 9:30 a.m.

In the 50-plus singles, Jose Olivencia was primed to defend his 2021 title, but Ronald Beard outlasted Olivencia for a 25-23 victory. The two were nearly equal the entire match until Beard dropped two winners to the left to gain the title.

In the 40-plus singles, Cesar Sala stopped Lenny Medina 25-11. After a close semifinal, Sala stepped up big against Medina, controlling the front court to keep Medina on the defensive.

To close the day’s action, a new face entered the Women’s Open divisions. Kaitlyn Colon dominated the Women’s B Divisions completing her slam with an impressive win over Michelle Clara, 25-14.

She paired with Cynthia Lian to defeat Raquel Garcia and Myohwa Hwee for the Women’s B Doubles crown.

See Saturday’s results, Sunday’s start times and the rest of the draws HERE.

*William Coello of Ecuador was also in the tournament draws, entering the Men’s 40-plus divisions.

See Friday’s results, Saturday’s start times and the rest of the draws HERE.