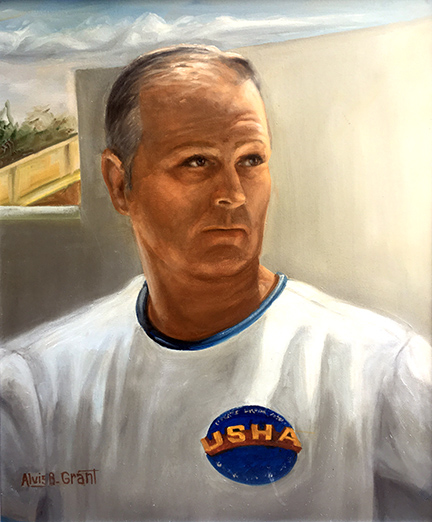 Joe Danilczyk’s main arsenal was a hopping two-way hook serve.  He could also mix in deadly kills, a round-house opposite left punch along with crafty placement.  He won his first National title when he and his brother Charlie won the Three-Wall National Doubles title in 1961.  The next year they reached a semifinal in the 1962 Four-Wall Nationals (Houston).  Joe had tremendous success in age division events, having won many masters championships beyond the age of 40 to become a National Grand Master.

Joe’s brother and doubles partner Charlie shared the following at his Hall of Fame Induction Ceremony:

“Joe Danilczyk had perhaps the biggest two-way hook serves of anybody. They enabled him always to receive soft returns, which he killed or drove with great power.

With his left hand he could punch kills or hit drives into his opponents’ chests. And playing front-court position, he always seemed to hit shots in font of himself or his partner.

Joe was one-wall doubles champion in 1964, 1966 and 1967. He was runner-up on four occasions and a semifinalist nine other times.

Although Joe was not known for his singles play, his great serve and aggressive shots made him a tough challenge for all the great singles players of his day.  None of them could take him lightly.”