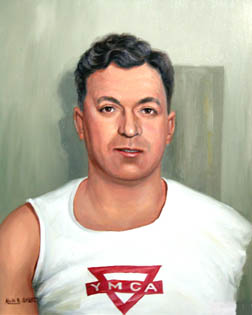 George was told to forget about handball, because it was strictly a two-handed game. Quam determinedly learned the game and went on to win an exhibition over Baltimore’s George Nelson in 1928, the year after Nelson won the national singles. Herbert Hoover invited Quam to the White House and chatted with him for half an hour.

“I’ve had more fun playing handball than any other activity…handball has been the vehicle by which I won my way out of darkness and despair…I don’t believe that having one hand has been a handicap…everyone is given more natural ability, equipment and talent than we will ever use. Success is not going to be determined by what you have to work with, but how you use what you have.”