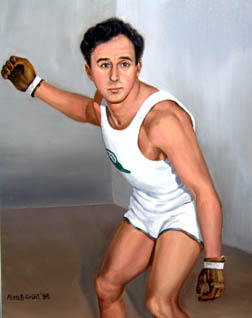 Angelo Trulio gave as much of himself to handball as anyone associated with the game…as a player, contributor and lifelong enthusiast. He developed a pattern of play best suited to his physical attributes — stamina and control. In 1932, he burst upon the national scene, as champion in both singles and doubles. He amazed the handball world when he won the singles 14 years later at the age of 39.

Trulio was absolute master of the big court, a man who thrived on rally, rally, and more rally. He was a cover boy for strength magazines in his glory days, a dedicated weight lifter and physical fitness model. Trulio also served as columnist for Ace Magazine.