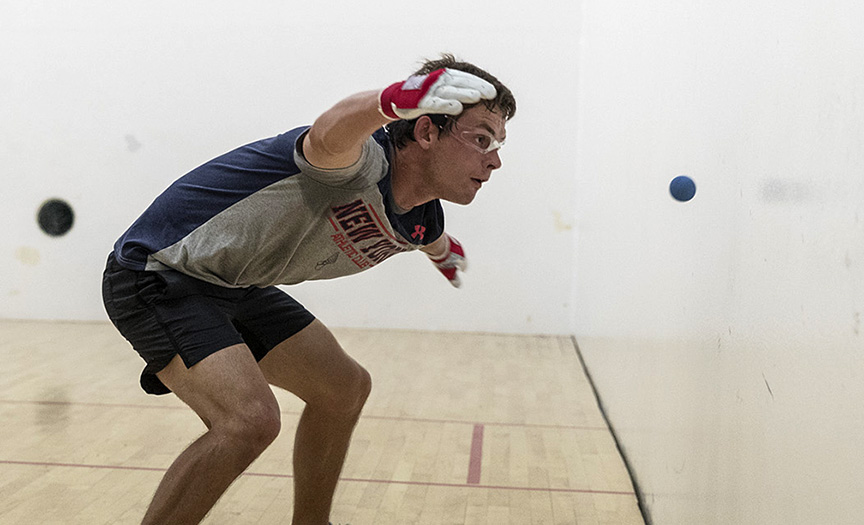 If you’re like everyone else, you’ve been looking for an easy fix or two to improve your game.

Unfortunately, handball is such a complex game that very few rules of thumb are true all the time. However, some ploys, habits and plays work almost all the time. Consider adding an item or two at a time and we’re sure you’ll pick up a point or two en route to getting 21 first.

1. If you’re having trouble keeping your eyes on the ball, follow it around the court with your nose. Start following it with your nose all the way into your hand as your stroke the ball, and you’ll be amazed at how many hand errors you won’t be making.

2. Reach back with your hand as you backpedal in the court so you don’t have to take your eyes and nose off the ball to find out if you’re too close to the back wall.

3. Stay down on your follow-through to keep your serve off the back wall. Follow through so your stroking hand points to the spot on the front wall where you’re aiming your serve.

4. Use the Z-serve to start an important match, since it doesn’t matter if your butterflies cause you to overswing.

5. Also, use the Z-serve for your second serve after a fault. The Z doesn’t have to land near the short line to keep it from caroming off the back wall.

6. If you run sprints to improve your speed on the court, run a few while backpedaling. No matter how much you practice running forward, you won’t improve that much since you’ve been running forward all your life. Unless you’re a defensive back in football, you haven’t come close to reaching your potential for backpedalling speed.

7. No matter what stroke you use or where you’re aiming, move toward the target as you stroke the ball.

8. After you step into the service zone, take a second or two to visualize how your serve will travel after you hit it. You’ll be pleasantly surprised at how much more accurate you’ll become.

10. Use the corner kill when your opponent is behind you in the deep court.

11. Use the straight kill when your opponent is in the front court with you but off to one side or the other. Hit to the opposite side.

13. Whenever time allows, visualize a successful shot before you hit the ball.

14. Center court, as in “get back to the center after you hit the ball,” is really deeper than cutting the court in half, or 20 feet from the front and back walls. All of us can move forward faster than backward, and we need to step forward into every shot.

15. When in doubt, go cross-court with your shots. The margin of error on cross-court shots is much greater than down-the-line shots that can tend to come off the back wall.

16. Hit your pass shots so they bounce behind the short line. Otherwise the floor will slow them up, and your opponent will be able to track them down.

17. Address angling shots on an angle. Just as you face the side wall to hit a ball traveling parallel to that wall, address the flight of balls traveling on an angle with the same theory.

18. Allow yourself only one kill attempt. If your opponent picks it up, pass him or her on the next shot, since a pass will probably score while another kill attempt will likely be picked up too. The rule: Rework the rally, just as good basketball teams do.

19. When receiving service, don’t try to win the rally until you’ve successfully changed positions with the server.

20. Call your opponent’s shots before they swing (though not out loud, as that’s an avoidable). Thus, you will truly be anticipating where you should be on the court.

21. Run to a position on the court a step or two deeper than where you think you will make contact with the ball. This is called the pre-shoot position and where you’ll be able to step into every shot.

Equipment bonus:  When you find a pair of court shoes you really like, buy a few pair as they will be replaced by a new model when you need another pair.

Practice bonus:  Learn to hit a shot in its simplest form — for example, from close to the front wall. Once you’ve become adept at the easy version, move farther away from the target and so on until you’ve duplicated a game situation. If there’s ever a doubt as to how you should hit a shot or serve, throw the ball and take a mental picture (or video) of how you’re throwing and where you’re letting go. That will be how you hit it.

Enjoy the journey of getting to 21 first!