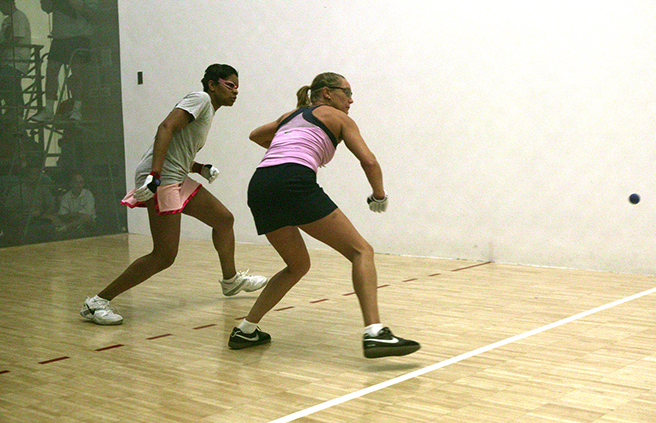 We’ve all heard this sage advice to the beginning handball player:  “Get back to center court after you hit your shot!”

Of course, this is sound counsel to the beginner, who is striving to merely make contact with the ball and doesn’t have a clue where his opponent will hit the next shot. Assuming equal ability levels, the opponent probably doesn’t know where he’s going to hit his shot either.

Thus, the physical center of the court, 20 feet from the front wall and 10 feet from either side wall, is a good starting point for the beginner.

But once you learn to anticipate the shot options available to your opponent, only on a few occasions is the true center of the court the best place to be when your opponent is striking the ball.

A simple example would be when your opponent is in deep court and hitting with an overhand stroke. Unless you wanted to run extra distances for a great workout, why would you go to the center of the court when your opponent will be hitting a shot that will almost certainly carry into the deep court? Why not start drifting back to get into a great pre-shoot position to return the most likely shot your opponent will hit, a ceiling shot?

There are many reasons the center of the court is not the best place to be. First, let’s start thinking of center court in terms of the reaction time needed to return the shot your opponent will most likely hit, as well as the pre-shoot position you need to attain before hitting your shot. Of course, it’s also important to remember your ability to run faster forward than backward.

The pre-shoot position, a step or two behind and a step away from where you will contact the ball, is very important to consider since any handballer has to be moving forward as he hits the ball. If you don’t step into the shot, it will be a weak one that will probably go errant.

This pre-shoot position means little to the beginner, who is caught up in merely chasing the ball around the court until he can hit it. But for the more experienced player, pre-shoot position is the most important factor for a successful shot.  In fact, the better the player, the more often he strides into his shot with his favorite stroke.

Considering the necessity of getting to a good pre-shoot position, center court in terms of reaction time needed will be at least a step behind the physical center of the court. Figure at least a step, since we must remember our ability to move faster forward than backpedaling.

Now consider the rules of the game. They simply state that you must return the ball before it bounces twice on the floor. Even the best kill-shot artists rarely hit their shots so low that they bounce twice before reaching the service line.  Thus, we’ve dramatically lessened the amount of floor space we’ll need to cover.  Since we’ll never have to protect the portion of the court very near the front wall, we can take another step back from the physical center for our center-court position in terms of reaction time.

These are the easily defined aspects of playing percentage handball, being in the best possible position to hit the best shot the highest percentage of the time. The same principle has long been taught for positioning when receiving service. The percentage player’s receiving position is very deep in the court, just a comfortable distance from the back wall. The reason is simple. From that position, the percentage player will never be forced to reach back as he returns the serve but will be moving forward into every return. This also is the essence of good pre-shoot position.

Of course, there will be exceptions, and the receiver can make an adjustment and move forward in the court if the opponent hits an extremely soft serve or is having an exceptional day at hitting the crack. But how often have you lost a match because your opponent was cracking out aces? Almost any losing cause is due more to consistently weak service returns from poor pre-shoot positions.

Unfortunately, center court in terms of reaction time cannot be defined as a specific spot on the court. When we backed up center court to two steps behind the short line and equidistant from either side wall, we didn’t take into account the way our opponent was setting up to hit his shot or the shot that we just hit.

So we’re going to broaden this area by putting our anticipation skills to good use. When we’re finished defining it, center court in terms of reaction time will be a large, egg-shaped area.

There’s one more consideration we’ll need to account for, whether we move better to our right or our left and which hand we’d rather use to return the ball. For most of us, this will result in a position with our strong arms resting equidistant from either side wall rather than the center of our body.

Your movement inside this area will directly correspond to the path of the shot you hit. If your shot is headed to the deep right, you will be moving toward the deep right portion of the egg-shaped area. If  your shot is a three-wall wrap, you will be moving inside the area as the ball travels around the court. This will put you in the best position to retrieve your opponent’s shot if he attempts to take it on the fly or if he backs up to return it from deep court.

You’ll want to keep moving around this area as your shot travels around the court until your opponent starts to set up to hit his shot. Until he starts to move into his shot, you won’t be able to anticipate where he’s aiming.

But if he’s on the right side of the court, he can hit a shot down the right wall to end the rally much more quickly than he could pass you on the left. It would take much longer for the ball to travel the extra distance–and here is where reaction time comes into play. A shot hit cross-court will take longer to travel the extra distance than a shot hit down the side wall to which your opponent is nearest.

Moving to the right to protect yourself from the quick shot down the right side wall will also help in forcing your opponent to hit the shot that will give you more time to react, the one to the left.

And you can probably start thinking about moving in that direction, since no knowledgeable handballer will hit the ball right back to you. Of course, this same theory will apply to shots that will have to be played near the left wall.

However, a word of caution is needed. Whenever I bring up this center-court theory at clinics, it never fails that at least one player turns this anticipation theory into an obvious intimidation ploy—he’ll play far too close to the opponent. It is not intended to help you create avoidable hinders by over-killing this strategy. Use it to achieve great pre-shoot position and be in good position to retrieve your opponent’s offensive attempts. The intimidation factor will be present just by doing that.

If your opponent is in deep court, setting to hit an overhand shot, you can safely stay in deep court. His shot will almost definitely end up in deep court. If it doesn’t, you’ll still have time to cover an errant shot that ends up in the front court.
However, the anticipation clues your opponent gives you get stickier when he is setting to hit an underhand or sidearm shot. But the angle of his body, determined by drawing an imaginary line between the tie in his shoestrings, will tell you which side of the court he is aiming his shot.

This line is his power line, the direction his body weight is moving. Just like a baseball hitter can’t go to the opposite field once he steps to pull the ball, a handball player can’t send his weight in one direction and hit the ball in another with any consistency.

After noting your opponent’s depth in the court, stroke and power line, you’ll want to note the amount of bend in his legs. No one can kill consistently from a standing position, but they can still pass you. So prepare for the pass on these occasions when he’s hitting sidearm but with no bend in the legs.

When the front knee is deeply bent, you will have to prepare for the kill attempt but still be ready to chase a pass or even a punch to the ceiling, since he still has each of these options. A scouting report will help you determine this player’s tendencies.

The last possible moment to make your move to a good pre-shoot position is as the ball leaves your opponent’s hand. If you weren’t already moving, you have lost some valuable time. Now is the time to make up for your slow start.

Upon hearing this argument for center-court position in terms of reaction time, which is deeper in the court than true center court, some have argued that the player who follows this strategy won’t be able to keep pressure on his opponent with the fly shot. But nothing could be further from the truth. You’ll find yourself in position for many more fly shots. Again, the reasoning is simple.

Most fly shots are hit from the area behind the service line and in front of the receiver’s restraining lines. A good pre-shoot position for these fly opportunities obviously fits with the deeper court positioning we’ve been discussing. Thus, we won’t be positioned in front of the short line unless we’re sure our opponent is attempting a kill.

If we were positioned at the short line to take advantage of fly opportunities, we would only have a good pre-shoot position for those balls that can be taken on the fly forward of the service line. However, those aren’t really fly opportunities, since the ball would be dropping too fast and we wouldn’t have the time necessary to stroke the ball—they’re just too difficult to fly. A short-line position needlessly leaves us too vulnerable to the pass without the reaction time necessary to make any other kind of play.

Hopefully, you will now be moving forward into every shot you hit.