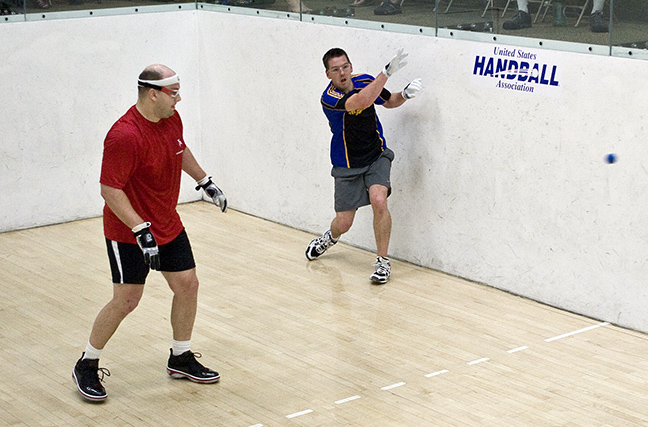 The floor will beat you every time. This sage advice comes our way in almost every issue of Handball magazine. What it means is that a player’s continued attempts of low-percentage kill shots will result in defeat.

But “the floor will beat you every time” means more to the advanced player than it does to the beginner. In fact, the more advanced, the more the statement means. At the highest levels, the ability to execute shots is very even, and shot selection takes over as the determining factor in who wins and who loses.

So call this an advanced bit of instructional advice. Beginners will still benefit, but please realize a higher priority for the newer player is shot technique.

The beginner should learn to stroke the ball with solid fundamentals — to hit the kill, the pass and the serve. The beginner can agonize over shot selection later.  Now is the time to play and enjoy the relative freedom from the subtleties of choosing between offense or defense, kill or pass.

The trouble with the advice is that most of us don’t know what “good” or “percentage” shots are, and no amount of explanation can teach us what is safe and what is risky.

Let’s face it: Most of us learn to play handball by simply playing. We find out what works and doesn’t work by trial and error. We formed habits early in our playing careers. These habits were usually determined by our physical characteristics, so a big person learned to hit hard pass shots, while the short, quick person learned to be a shooter, and a person with lots of stamina became a retriever. Those habits were reinforced with winning performances, and soon we had our “game.”

So when someone tells you to use percentage shots, your mind says, “Yes, that sounds logical and right.” But when you get back on the court, your old habits take over. The pressure of the game and the good feeling you get when you take your best shot removes the mental assent you gave to play percentage handball.

So how do you break out of these self-defeating playing patterns?

Don’t relax. Just because you are not killing the ball doesn’t mean you are on vacation. You have to work just as hard to hit good defensive shots as you do to hit good offensive shots. Your opponent will soon catch on that you’re not trying to kill much today, and he will start laying back for your passes and ceiling shots.

Don’t let this tempt you. Stick to your plan; it will just be better practice.

A couple of things will surely happen:

The reason for recommending this game is that you can’t learn shot selection until you learn the many shots at your disposal. This game will help you explore the uncharted regions of shot variety.

You may want to start by playing this new game with opponents you usually beat handily. At first it will even things out. Later, as you begin to hit good defensive shots, you will beat him worse than ever.

Then it’s time to try your new “game” against better players, or limit yourself to just one type of defensive shot against the player you’re handling with ease. In one game you might hit only ceiling shots for defensive shots, and in the next only wraparounds. You’ll soon know what your best shots are and which ones need to improve.

The idea is to get you thinking about the shots you use regularly. What you use — and use effectively — may still be determined by your physical capabilities, but you will find you have a much wider range of shots than you realized. And you will learn to use them all more effectively.