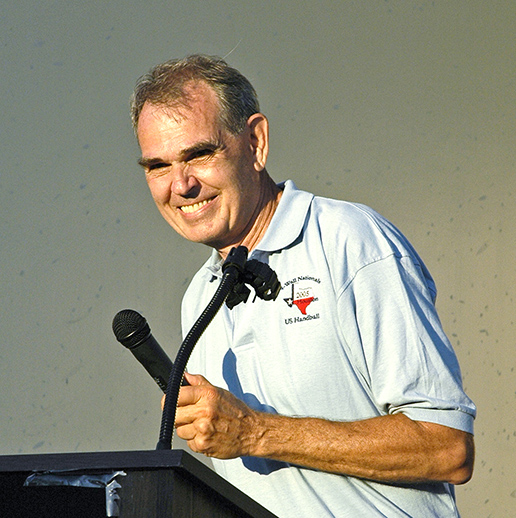 It was George Miller who spearheaded the effort to get eight regulation size three-wall courts with lights constructed in the mid-70s to bring the Nationals to northern Ohio in 1975. The tournament has been held there ever since. For players who made the trip to the Lucas County Rec Center for the USHA Three-Wall Nationals each Labor Day Weekend, George didn’t just embody the event, he was it (he would be the last person to mention that fact). While establishing an amazing cadre of volunteers, George still did it all:  running the grills, sweeping the courts and even picking up trash around the park.

His amazing work stretched nearly five decades and made the Three-Wall Nationals a top destination not only for handball players in the U.S., but extending to Canada, Mexico, Ireland, Australia and more.

As an incredible volunteer off the courts, George was a tenacious competitor on them, earning Grand Master status with 14 USHA National Titles (13 Three-Wall, 1 Four-Wall).

George D. Miller, who made a national name for himself as a handball champion, died Friday at Hospice of Northwest Ohio. He was 82.

Mr. Miller died of pneumonia after battling dementia and dysphagia for some time, his wife, Joyce Miller, said.

Throughout his life, Mr. Miller worked for various Toledo-area companies — including as a warehouse manager for Superior Uniform Sales and as a club manager for Spring Meadows Court Club, formerly in Holland — but his true passion lay on the handball court.

“The handball community has lost their king,” Jim Lowe, a friend and former doubles partner of Mr. Miller’s, said, reading aloud from an email he’d received from another player in response to Mr. Miller’s passing.

“We called him our ‘greatest of all time.’ He was our ‘GOAT,’” said Rick Stevens, another of Mr. Miller’s friends.

Both Mr. Lowe and Mr. Stevens are members of the Toledo Handball Club, of which Mr. Miller was president.

As a man, Mr. Miller was humble and introverted, his friends and wife recalled.

“He was a really quiet person. He never promoted himself in any way,” Mrs. Miller said.

But as a player, he was a competitor.

“He not only knew how to play the game, but he figured out the best strategies to win. He was a smart player,” Mrs. Miller said. She is herself a national handball champion.

In addition to a slew of state and regional titles, between 1984 and 2011, Mr. Miller won 13 national 3-wall doubles handball titles, as well as one Canadian title.

Mr. Miller once told The Blade, “Handball is a true sport … It’s like boxing. It’s one-on-one. It’s just you and your opponent.”

In the early 1970s at the Lucas County Recreation Center in Maumee, Mr. Miller helped plan and build what at the time was considered the largest 3-wall handball and racquetball complex in the country. For well more than four decades, the courts have housed the National 3-Wall Handball Tournament every Labor Day Weekend.

For years, Mr. Miller ran the tournament on his own.

“George was quiet, but when George wanted to get something done, it got done. When George spoke, people listened,” Mr. Stevens said.

During the 2022 national tournament, Mr. Miller’s friends have planned to rename the county recreation center’s handball courts in honor of the late champion.

“Handball is like a big fraternity. If you name a player that plays in New Jersey or Fort Worth, Texas, you would know them because you’ve probably played them. And George was one of the players who kept that fraternity close-knit,” Mr. Lowe said. “He meant so much to handball and to me as a friend.”

Mr. Miller shared his love for the sport with his father, George A. Miller, Sr.

Both father and son were inducted into the Ohio Handball Hall of Fame, in 1987 and 1991, respectively. For years, Mr. Miller ran a handball tournament — the George Miller Sr. Memorial Handball Tournament — in honor of his father.

The senior Miller, like his son, was a warehouse manager, but he also supported his family by buying and flipping houses, Mrs. Miller said. His mother, Marie Miller, worked as an accountant.

Mr. Miller was born at home on Sept. 11, 1939 in Whitehouse. In 1957, he graduated from Macomber High School, where he played basketball. At 6 feet 4 inches, the man was a natural athlete.

After helping the Macmen reach the state semifinals in his senior year of high school, Mr. Miller went on to play some college ball for the University of Toledo, Mrs. Miller said.

The Millers were married on Aug. 16, 1980, and Mr. Miller became a stepfather to his new wife’s two sons, Todd and Ryan Sturt.

“He was so delighted to be given the opportunity to be a stepfather to them,” Mrs. Miller said. “He knew enough not to just throw himself in, but instead he quietly folded into their lives.”

Always an avid reader, Mr. Miller especially cared for the Swanton Public Library. Tributes in his honor can be made there or to any of the other charities that he supported throughout his life.

Mr. Miller was preceded in death by his brother, Richard. He is survived by his wife, Mrs. Miller; his stepsons, Todd and Ryan Sturt; four step-grandsons; and his sister, JoAnn Orr.

A memorial will be held at Weigel Funeral Home in Swanton on Thursday. Visiting is scheduled from 3 p.m. until 6 p.m., with a service and then a social hour at Loma Linda Restaurant following.