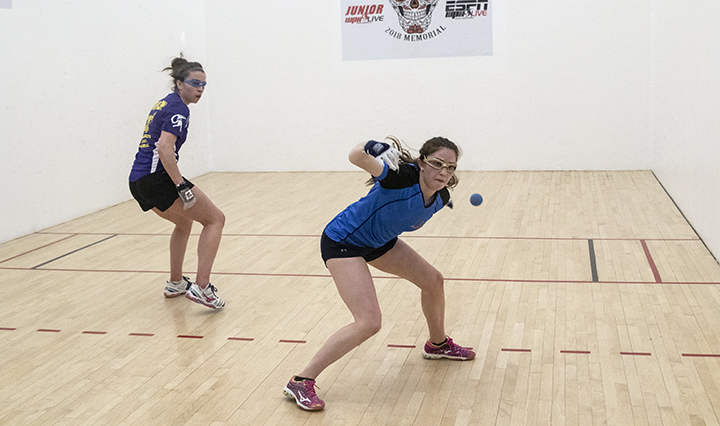 TUCSON — The excitement and drama of the WPH R48Pro Tour was on full display for Sunday’s finals in The Tucson Memorial.  Killian Carroll made his way back to another R48Pro final after falling in the semis in Atlanta.  Sean Lenning was looking for some redemption as well after suffering the same fate:  being bounced in the semis of that same tournament.  Playing in front of a raucous home crowd at the Tucson Racquet Club, Lenning’s serve was zipping all over the court as he dominated Carroll in two games, winning the second R48Pro stop of the season, 15-10, 15-7.

Carroll found himself in an early hole, trailing 9-1, but he was able to close the gap with some heart-stopping gets and precision kills.  But the day belonged to Lenning, as he kept Carroll guessing and off-guard with low drives to the right, and he ultimately slammed the door with a fortuitous right front corner kill.

Sunday’s final turned out to be that kind of a match for Lenning, while Carroll couldn’t catch a break.  In the second game, and looking to force a third, Carroll was on the receiving end of an unfortunate bounce which hit his shoe, awarding the rally to Lenning.  After that, the momentum was in Lenning’s favor, and he rolled to his first R48Pro victory of Season 8.

In ladies action, Catriona Casey (swinging above) faced a resurgent Ciana Ni Churraoin, but she was able to hold her late rally off for the victory, needing overtime in the second game to win, 15-7, 16-14.

If you missed any of this weekend’s action, you can watch the replay at WatchESPN.com or on the Watch ESPN App (iPhone or Android).

See the final results and scores on The Tucson Memorial’s R2sports site HERE.

The WPH put on another incredible show that carried some extra meaning.  Players and fans from around the world trekked to Tucson for this $50K “no entry fee” event that paid tribute to our fallen handball friends.  Read the WPH wrap-up and report HERE.

Killian Carroll overcame a collision with the sidewall at 0-0 and a great performance by David Fink to earn a trip to Sunday’s final.  After sliding into the wall at 0-0 after making a few great gets, Carroll won the first and was up 9-1 in the second before Fink made a great comeback to win the second. Carroll mounted another 9-1 lead in the third before Fink made another strong effort to get back into contention but Carroll closed it out for the win.

The WPH Qualifier Draw can make the preliminary rounds exciting and even unpredictable.  Unpredictable was indeed the case on Friday, as many players qualified for the first time.  In the top qualifier bracket, Richie Fernandez (Juarez, Mexico) toppled Marcos Chavez (Yorba Linda, CA), 25-21 while Tyler Stoffel (Mankato, MN), a collegiate All-American coming off a year of injuries, upended favorite Max Langmack (Springfield, MO), 25-12.

The Tucson Memorial and WPH R48Pro VIII Stop #2 boasts the top prize money purse of the year at $50K!  While the exciting action of the WPH R48Pro Season 8 resumes at the Tucson Racquet Club, the event honors those in our community who have left us, but also celebrates their lives through the sport we love most.

Be sure to catch Sunday’s action!  Watch LIVE coverage on WatchESPN.com and the WatchESPN App  See the WPH Schedule).  Follow the draws on the tournament R2sports site HERE.