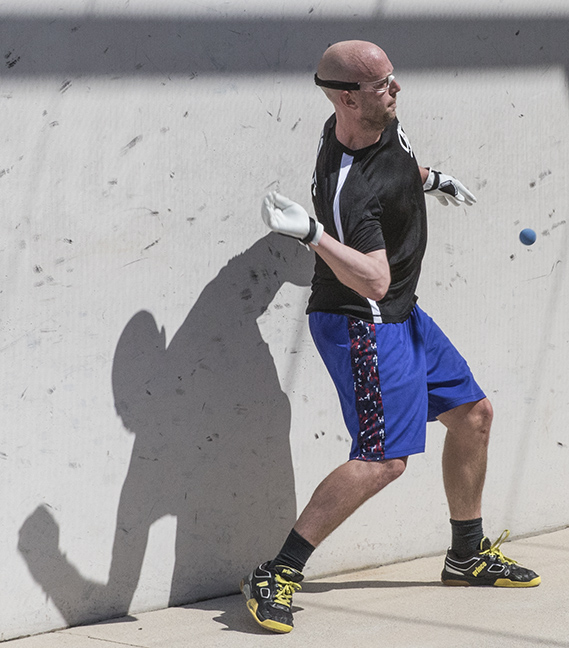 MAUMEE, Ohio — The 66th USHA National Three-Wall Championships wrapped up on Labor Day with Marcos Chavez helping Sean Lenning slam, and marking the fifth Open three-wall doubles title for Chavez.  After defeating Tyree and Jurell Bastidas 21-18 in the first game, the defending champs rolled to a big lead in the second.  Trailing 15-8, the Bastidas brothers dug in and appeared ready to overtake their opponents at 18-19; however, a left-handed miss by Tyree gave Lenning and Chavez the side out.  Back in the box, Chavez served up a momentum swinging ace to reach championship point. Then ensuing serve and rally was almost anti-climatic, as another mishit sealed Chavez and Lenning’s title defense.

In Women’s action, Hillary Rushe and Ashley Moler secured the Women’s Open Doubles title with a two game win over Toledo’s Leah Kirk and Deanne Przybylski.  Robin Sterrett and Deb June finished second.
The Toledo Handball Club again hosted a tremendous tournament.  Players and fans were met with a gleaming freshly-painted facility on Thursday.  Once Mike Moran and his crew fired up the grills, they kept handball players and families well fed the entire week.  Thank you to all event sponsors and volunteers who made the 66th USHA National Three-Wall Championships a success!

Final results for the National Three-Wall Championships are available HERE.

Sean Lenning won his eighth Three-wall National Singles title with an impressive win over Tyree Bastidas, 21-17, 21-12.  This year’s contest wasn’t the lopsided affair from 2015.  Bastidas looked in control for much of the first game, cruising to a 17-10 lead.  After a timeout, Lenning went on a tear, scoring 11 unanswered points to steal the first game and the match’s momentum.  Once the second game started, Lenning raced to a 6-0 lead before Bastidas scored his first.  Leading 10-3, Lenning delivered kills, passes and aces, and en route to scoring his 17th point, ran down a deep ball for a weak return that Bastidas shot into the floor.  After a Lenning timeout, Bastidas mounted a comeback, getting the score as close as 12-19 before Lenning delivered a kill for the final point.

In Men’s Doubles action, both semifinal matches were decided by tiebreakers.  Defending champs Sean Lenning and Marcos Chavez took a first game punch from Mando Ortiz and Braulio Ruiz, losing 12-21.  In the second, Chavez/Lenning began to heat up, and they repaid their opponents by winning by an identical score.  In the tiebreaker, Lenning and Chavez rolled, punching their ticket to the final 11-0.

In the second semifinal, after winning the first game, Dane and Adam Szatkowski couldn’t muster consistency on offense and fell to Tyree and Jurell Bastidas, 16-21, 21-5 and 11-3.

The road to the singles title must pass through Sean Lenning.  After Luis Moreno blitzed Lenning in the first game of the semifinal 21-7, there were whispers that the defending champ wouldn’t reach this year’s final.  But in the second game, a “sleeping giant” awoke.  Many people in the gallery noted how the ball seemed to make a different sound against the wall for Lenning, as the seven-time champ began to crush each shot to force a tiebreaker, winning 21-15.  In the third frame, Lenning stormed out to a 10-0 lead and held on to win 11-4.

In the second semifinal, Tyree Bastidas blasted the ball deep to keep the hot-shooting Ortiz out of his comfort zone.  After winning the first game 21-8, Bastidas held off a surging Ortiz comeback to close out the win, 21-19.  The rematch of last year’s final will showcase the 2015 World One-Wall Champion Lenning against this year’s National One-wall Champion Bastidas.

The Men’s Singles Final will be played at 11 a.m. on Sunday and will be filmed by Buckeye Cable Sports Network.

It’s not a Three-Wall Nationals unless the Szatkowski Brothers are involved in a dramatic Men’s Open doubles match.  A large crowd from Chicago cheered on the Szatkowskis, who took the first game 21-10, lost a dramatic second game, 21-20, then held off two match points to edge Luis Moreno and Abe Montijo 11-10. They’ll face the Bastidas brothers in what promises to be a spectacular semifinal.

Toledo’s Matt Osburn was presented his Grand Master Sweater at this year’s Three-Wall Championships on Saturday.  Osburn has won many of his required 10 titles to join the exclusive club of champions. Fellow Toledo handballer Phil Kirk made the presentation and introduced Osburn who read an excerpt from his journal he kept as a youth, recalling every handball match he played. Osburn then thanked his wife, family and fellow players who made his handball journey a truly special one. 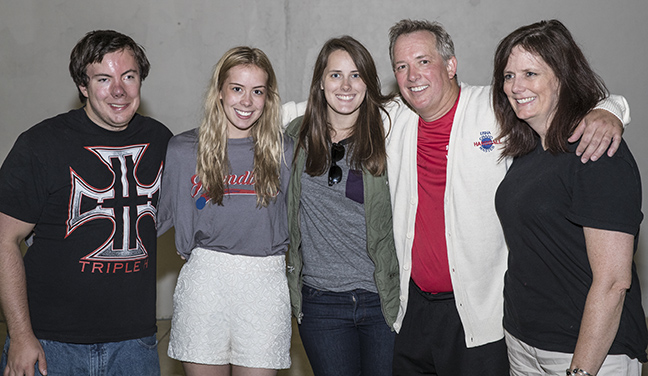 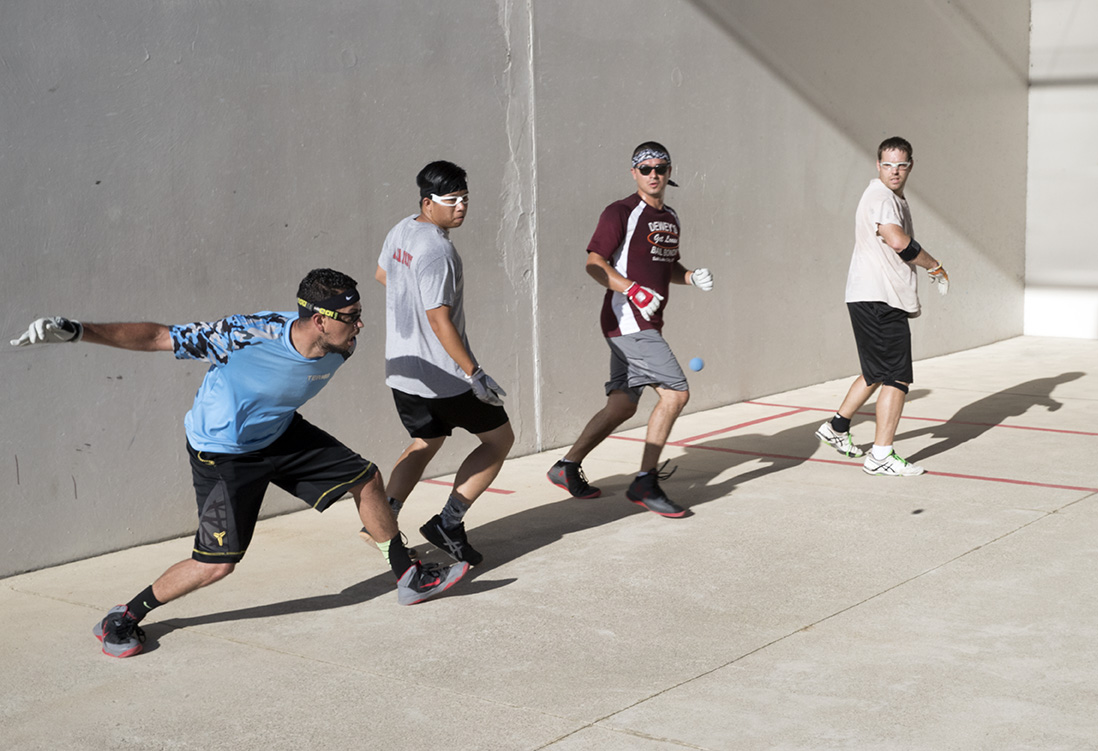 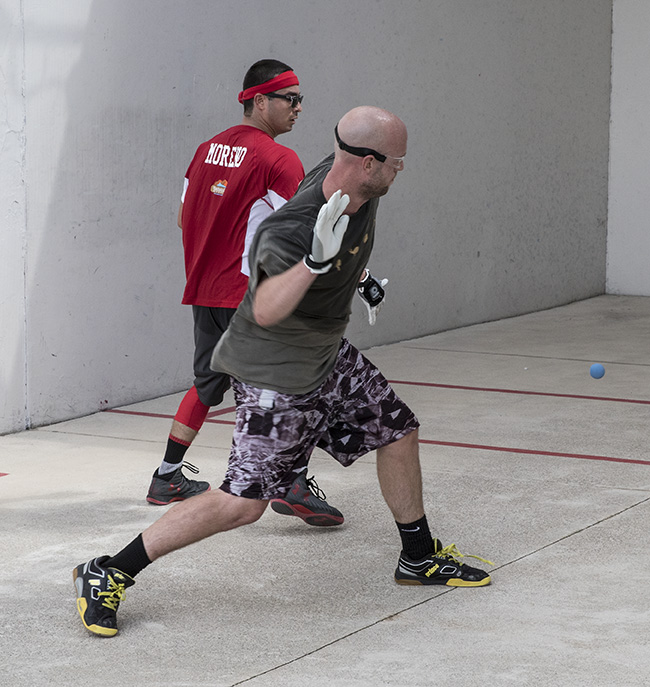 The second day of action at the 66th USHA Three-Wall Nationals brought more intense play and punishing tiebreakers as challengers fell to title contenders.  Abraham Montijo played his second tiebreaker in as many days, but couldn’t get past Luis Moreno in the quarterfinals, 16-21, 21-3 and 11-5.  Other top seeds advanced to set up the Men’s Open semifinals where Sean Lenning will face Luis Moreno at 11:00 a.m. (Eastern) and Tyree Bastidas will tussle with Armando Ortiz at Noon.

Men’s Open doubles opened with a pair of tiebreakers.  Tyler Stevens and Ryan Bowler came roaring back from a 21-6 game one loss to defeat Will Lemp and Richard Lynch, 6-21, 21-3 and 11-2.  In the other match, Juan Canelas and Anthony Collado battled Marco and Carlos Lemus for three games, but the Lemus brothers pulled out the win, 18-21, 21-19 and 11-10.

Canada’s Ivan Burgos fought off match point against Joe Mastropierro, 8-21, 21-20 and 11-8 in the A Singles.  Burgos will meet Ohio’s Joe Frankenfield in the semifinals.

In 70s action, Keith Thode’s Cinderella story continues, as he outlasted 2015 finalist Carl Valentino.  Down 7-1 in the tiebreaker, Thode made a remarkable 10-0 run to close the match and advance to the semifinals.  The road to the final doesn’t get any easier for Thode as he’ll face Grand Master Mike Meltzer tomorrow at Noon. 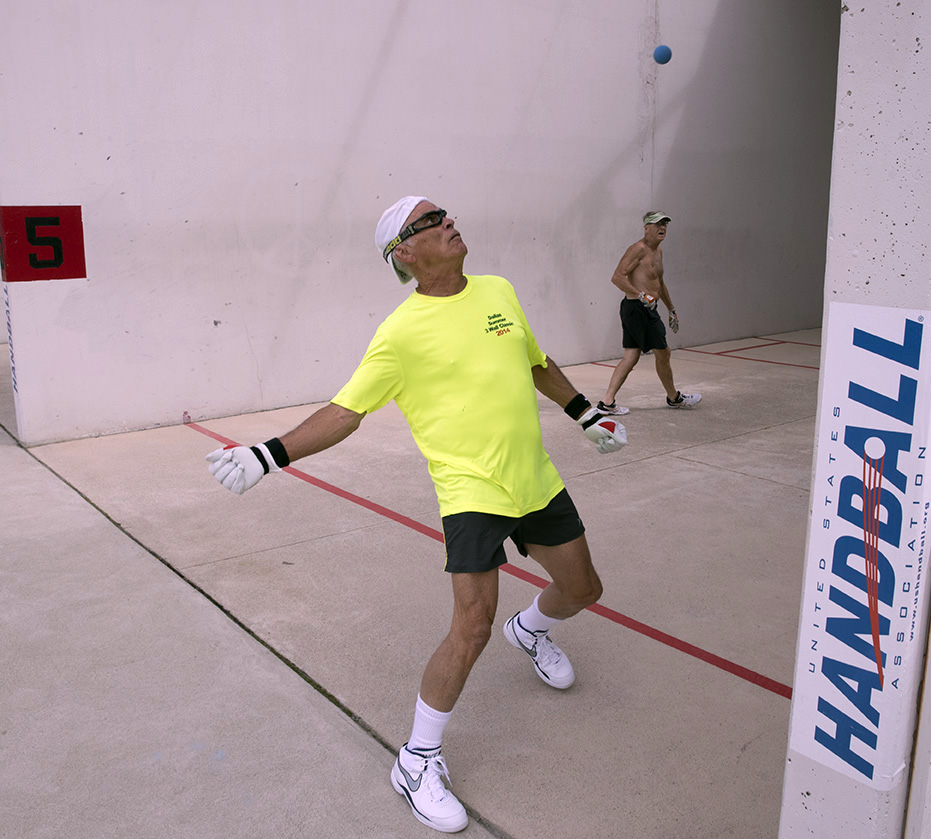 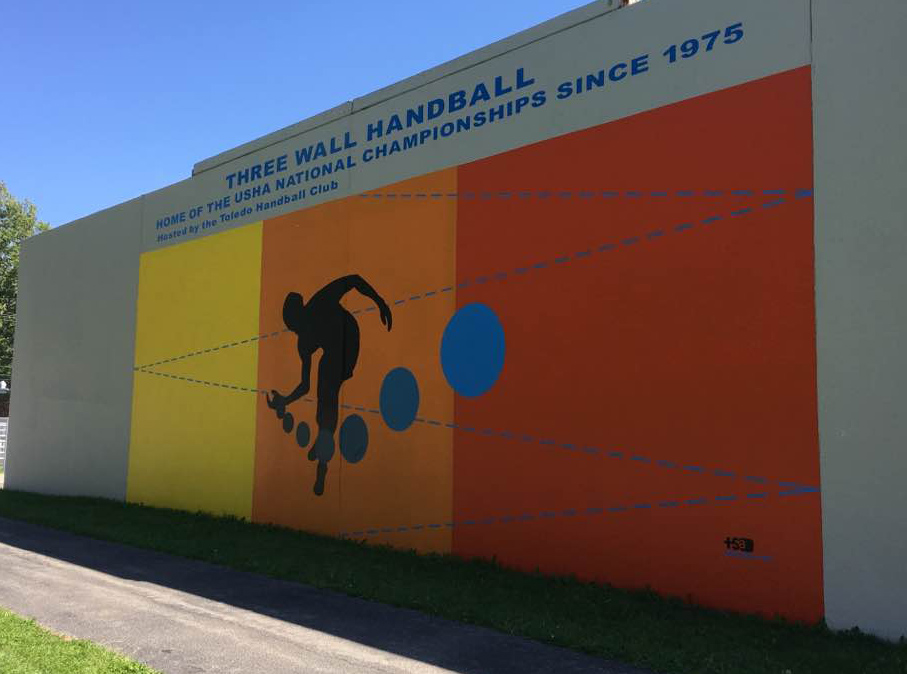 Just in time for the 66th USHA National Three-Wall Championships, the mural by the Toledo School for the Arts gracing the north wall of the Lucas County Rec Center is complete!  The Toledo Handball Club wishes to recognize state handball associations across the country with a sign placed on the mural.  If you’re interested in having your association or club listed, please see Jim Smith or George Miller at the Three-Wall Nationals.

Singles competition kicked off the 66th USHA Three-Wall Nationals on Thursday at the Lucas County Rec Center.  Later Thursday night, Sean Lenning (Seattle) will begin his title defense against Anthony Collado (Chicago) in the round of 16.  Lenning will  also try to repeat his slam in the doubles with Marcos Chavez.
Michigan Handball’s Keith Thode is known for capturing thousands of great action shots at Nationals and World Championships.  While Thode’s work is featured on Handball Magazine covers and websites, he is rarely captured on film!  On the first day of play, Thode advanced to the quarterfinals of the 70-plus division with a 21-13, 21-14 victory.