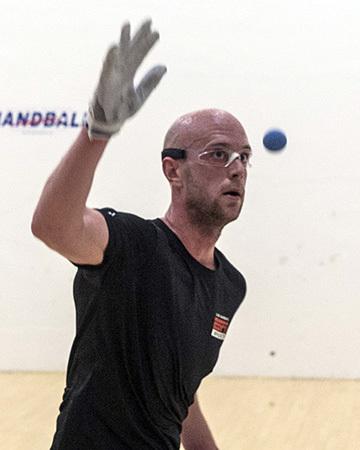 WEST ALLIS, Wisc. — The path to the 2016 Milwaukee Classic Men’s Open title was a rocky one for Sean Lenning.  But once he reached the final, the battle-tested veteran defeated defending champion Luis Moreno, 21-14, 21-18.  The top-seeded Moreno cruised to victories in earlier rounds while Lenning was pushed to tiebreakers by Minnesota’s Ryan Pesch and Wisconsin’s Anthony Selestow in the their quarterfinal and semifinal matches respectively.
Based on their performances up to Sunday’s match, it seemed Moreno would once again defeat Lenning in Milwaukee.  Moreno built an early 9-0 lead forcing Lenning to burn a time out.  Once play resumed, Lenning found his groove and outscored Moreno 21-5 to close out game one.  In the second, Lenning’s hot hand continued and he catapulted to a 20-11 lead over to Moreno only to watch it evaporate to 20-18 as Moreno caught fire.  Once again, a time out (glove change) helped Lenning settle in, where he score the remaining two points for the win.
Vic Perez and Nikolai Nahorniak defeated Dave and Mike Munson to win the Men’s Open Doubles, 21-17, 21-16.
Aimee Ulbert won the Women’s Open Singles title by defeating Hilary Rushe 21-16, 21-3 in round robin play.
Once again, Charlie Keller, Jeff Werstein and the rest of Milwaukee Handball crew hosted another tremendous Milwaukee Classic.
See Milwaukee Classic DRAWS & RESULTS HERE.