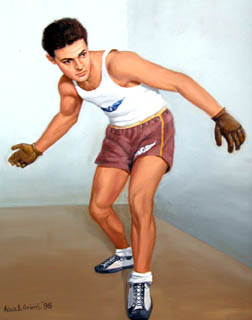 Because Banuet was such a great athlete, a boxing promoter talked him into a short-lived boxing career, which forever banned him from AAU-sponsored handball.

Banuet stories are legendary. Trulio said: “I’ve seen him run up a back wall to retrieve a shot. He could do things that are regarded as impossible.”

W.O. McGeehan, sports editor of the New York Times said: “He is the greatest champion in his chosen sport I have seen. Greater than Babe Ruth in baseball, greater than Bobby Jones in golf, greater than Jack Dempsey in boxing.”