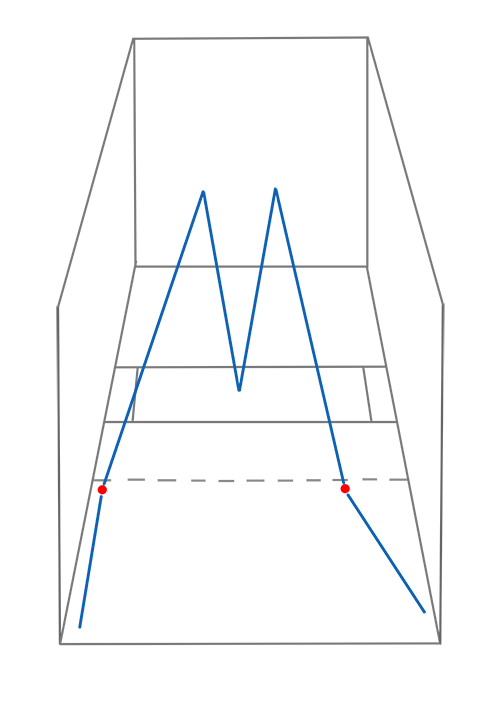 One of the questions most commonly asked of the top players is how to hook the ball.

The question usually is answered with the appropriate physics involved, both for the natural and the reverse hook.

Then comes a warning: Don’t try to hook the ball until you can control it.

That warning may be the most important thing to remember. Though most of the top players can hook the ball, the ability to hook is not the reason for their success.

Victory comes from solid fundamentals, the ability to control each and every shot in your repertoire, and hitting the correct shot according to your and your opponent’s court position and the situation.

Since the best players also have uncanny shot anticipation, reading hooks becomes part of that process for them. Consequently, hooks tend not to be that effective against the top players in the game.

Of course, there’s a time and a place for everything in handball. The time and the place for hooks is when and where your serve or shot will be more effective with a hook applied to it.

Since imparting spin to the ball requires hitting it on a specific spot on your hand and rotating your wrist as you strike it, it’s obvious that great fundamentals are needed before you attempt to hook the ball.

Also, for a hook to be effective, it’s necessary to make the ball contact the floor before hitting a side wall in the air, since the side wall will take the spin away from the ball.

Finally, hooking shots should be controlled and hit low on the front wall so they won’t carom off the back wall,where all the spin will again be lost.

Thus, if you don’t have the type of control needed to make your hooks effective, you shouldn’t waste your time with them. Instead you should be striving to improve your control.

A natural hook is just that­–a natural spin that most players impart to the ball without even thinking about it.

As we develop a sidearm stroke, the hand tends to cut under the ball as we strike it. This is what puts the natural hook on the ball. For most of us, developing a natural hook is as easy as emphasizing the undercutting of the ball on our sidearm stroke.

To emphasize the natural, try contacting the ball in the center of the hand and let it roll across your hand before releasing it between the thumb and index finger. The follow-through is very important since it will dictate the amount of wrist rotation.

A reverse hook usually requires many hours of practice to develop.

The ball should be contacted near the base of the index finger so the hand will rotate over the top or outside of the ball to impart the reverse hook. Try to keep the ball on your hand so it rolls off the hand near the base of your little finger when you release it.

A word of caution is needed here: This manipulation of the elbow and wrist can result in sore arms, such as tennis elbow.

Be sure to take it easy and not overdo it in your first few practice sessions. Over-doing it during one of the first hooking sessions has forced many a player off to the sidelines for extended periods of recuperation.

Regardless of whether you’re ready to add hooks to your repertoire, everyone should be aware of the natural hook they are already applying to their shots, particularly on the serve.

As a rule, the most difficult shots to return are those that end up close to a side wall, especially in deep court. So we need to know how much our shots are hooking to know where we should be aiming our straight passes and drive serves.

For right-handers standing near the center of the court during the rally or on their serve, a natural to the left will break into the side wall. Thus, the bigger the natural applied,the farther away from the side wall the shot should hit on the floor so it ends up close to the side wall in deep court, where your opponent will be attempting his return.

The player with little or no natural hook can draw a straight path for his serves and passing shots so they end up close to the side wall in deep court.

Finally, the right-hander who can hit a reverse hook will aim his straight passes and drive serves for a spot on the floor very near the left side wall so that the ball will travel along the wall all the way to the back wall.

The converse holds true for the right-handed player hitting a shot to the right side of the court:

Hooks that break into your opponent’s floor position will handcuff the player who turns his back on you as you stroke the ball.

However, as the top players will quickly point out, this practice won’t work indef-initely against anyone. Even Pavlov’s dog would catch on to hooks, unless you mix them up.

Another reason to use hooks sparingly is the fatigue factor. The extra effort used in hooking the ball is far greater than you might think and will result in less effective hooks and less control late in the match, when you need both the most.

The ability to hook the ball can pay especially big dividends in doubles. Hook-ing the ball away from one opponent and toward his partner can cause confusion as to who should hit the shot, if not catch them totally off guard.

As you practice hooking the ball, remember that a hook won’t be effective:

Otherwise, as long as you learn how to control them, hooks can be very effective weapons in your offensive arsenal.