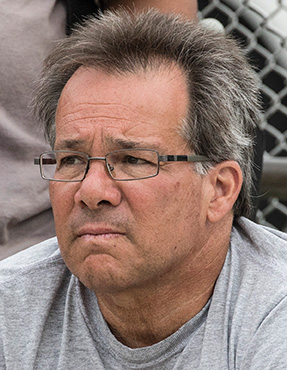 The serve is the one-wall handball player’s greatest and deadliest weapon–for several reasons.

One-wall is a serve-and-shoot game of angles. The server’s lead foot ends up practically on top of the short line. Even with practice you’ll still commit an occasional foot fault, but it will be worth the edge you will gain on other service attempts. Being closer to the short line, and therefore the wall, means the serve needs to travel less distance.

The best singles players serve from within a few feet of the side line. Righties are partial to the right side line and lefties to the left one.

One reason for this is that as they strike the ball, their hand is hidden from the receiver’s view. When starting the serve and appearing to be going up the line, a break of the wrist will send the ball a mile away toward the opposite side of the court.

Another reason is that they can hit the ball harder when they serve behind themselves, thereby making their cross-court offerings more devastating. Using a combination of cross-court angles along with shots straight up the side line is extremely effective. Toss in an occasional deep one, throw in some hooks and your serve will be absolutely deadly.

The third advantage is that you can legally hide the serve from the receiver’s view. Since you’ll have more problems with hinder serves on your attempts up the line, it is often used to keep the opponent honest, and the majority of serves will probably be cross-court. In singles it is impossible to return a combination of successive shots hit strongly to opposite corners of the court. So when the serve gets returned weakly, just swat it into a corner.

Serving with your back to the closest side line can also be quite effective. Doing this allows the server to keep a close watch on the opponent’s last-minute shifts in direction. Correct use of this tactic involves leading the receiver to believe that

the ball will be hit cross-court. At the last moment you can flick your wrist and pull the ball behind you. The greater your ability to make the receiver move the wrong way, the fewer times the referee will call a hinder serve.
One reason to use this service position is that it makes it extremely difficult for the receiver to find your opposite hand on his return of serve. Attempts to do so will often result in the return landing outside the playing zone.

When you see a lefty and a righty paired up against each other, you’ll notice that the server may change his game around and increase the number of serves up the line to the off hand as opposed to using the cross- court angle to the opponent’s strong hand.

Lefties go up the line more often than righties. Since lefties play righties on a consistent basis, they are more accustomed to returning the serve cross-court to the server’s off hand, and the righty is more comfortable serving cross-court because he is usually playing another righty and the serve would be to the opponent’s off hand.

On the other side of the coin, the righty’s customary return up the left side line will be feeding the lefty’s strength. By now you’ve probably realized that serving with your back to the closest side line is commonly done when a lefty and a righty play against each other. You don’t have to be a genius to see that a strong serve to the receiver’s off hand will result in a hanger to your strong hand.

Of course, there is the rare chance that two lefties will face each other. You never know what might happen in this case.

Unlike three- and four-wall, the lefty on a lefty-righty team plays the right side. The advantages to this formation are:

When you start playing doubles, many veterans will tell you to serve deep, with a hook, and go off the wall with a fly shot.  They’re right: Stick with a serve near the long line. Since there are two receivers, the angle serve will not be as effective when used by a left-side player. The receiving side will shift and take advantage of the huge opening you’ve created by choosing this service position. The gap will be between the server and his partner or the side line, depending on which distance is greater.

There are some exceptions to this approach. The first is when a righty is serving from the right side. Then the gap doesn’t exist because your partner will be straddling the service marker on the left line. The receiver will be pulled off the court and forced to return the ball to your partner’s right hand. And an opening will have been created in center court. A drive up the middle will be a high-percentage second shot, virtually guaranteeing that a point is scored.

When playing a lefty-righty team you’ll need to be a little more careful, since the lefty plays the right side and his strong hand is in the center of the court. To keep the lefty honest you’ll need to hit a few of your second shots to the right corner, preferably in front of your partner.

The second exception is when a righty is serving from the left side to a lefty, and vice versa. This can be successful for the following reasons:

In general, stay away from the side lines. It isn’t worth losing your serve if the ball strays wide. Aiming for the short or long lines is less of a gamble since the penalty is only a fault.

When serving, try to hit deep to the supportive player’s opposite hand. This will be the safest yet most effective serve you can use. If your opponents shift to give added coverage, they will be creating an opening on one side of the court. When necessary, serve to the opening. This forces them to stay honest and reopens the opportunity to go back to the original serve.

There are times when the supportive player will be returning your serve effectively. These occasions call for a change of strategy. Start serving to the dominant player. He may not do a better job of hand-ling the serve and will also have a much harder time getting back up front. Remember, he’ll be responsible for covering the majority of the court, and this tactic will result in more court being inadequately defended against your team’s follow-up of his return of service.

When playing a lefty-righty team, a serve up the center can still be quite effective. An occasional low serve to the side lines will create the opening in the middle. Now when you serve up the center there will be two players hanging back to make the return. This means confusion between the receivers and lack of front-court coverage.  It isn’t unusual to see teammates interfere with each other’s shots, or to see both receivers leave the ball for their partner, meaning a likely point for the server.

Your No. 1 priority is putting the ball in play. At a minimum, this will put you in the rally and provide your opponent with a chance to foul up.

Contemplate the progression of the match and determine the amount of risk you are willing to take. After doing your calculations, you’ll probably decide to take a little off your next attempt. This indicates playing it safer. Stay away from the border of the receiving zone, since a mis-hit can mean losing your serve. Aiming for the junction, a side line with the short or long line, doubles your chances of messing up. A little less power means a lot more control.
Lastly, a lousy serve will almost certainly cause your side to lose the rally.

By now you are probably scratching your head and asking yourself: “What options does this leave me with?” One suggestion is targeting the area 3 feet in front of the long line. This allows room for error and prevents the receiver from pouncing on the ball. In addition, a deep serve will often provide an easy follow-up shot.

Try different things. Change the speed, position and height of your serves to find what you and your opponent’s strengths and weaknesses are. Control players can afford to use more of the court. Power players may need to stay away from the lines.

Controlled power can be menacing and is often just the right combination to make a champion. If nothing else, mixing it up will prevent opponents from getting used to what you have.