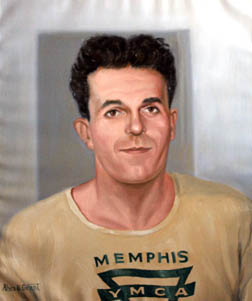 Sam Atcheson won the four-wall National Open singles title in 1933 and 1934. In 1945, at the age of 43, he added the Open doubles title with partner Walter Detweiler.

The slender, wiry and speedy perfectionist was a stellar national Y champion. He won 14 national titles over a period covering 1930-45. In YMCA competition he was virtually unbeatable. He took the singles six times from 1931 through 1937, missing only in 1934 when George Nelson of Baltimore was the victor.

On Nov. 4, 1989, Atcheson was honored as the first inductee into the National YMCA Handball Hall of Fame.