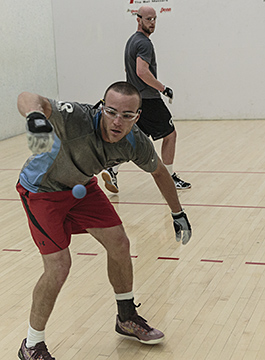 WEST ALLIS, Wisc. — “Luis Moreno OWNS the Milwaukee Classic,” declared tournament director Charlie Keller.  Nobody could get the best of Moreno at the Wisconsin Athletic Club as he slammed for the second year in a row, defeating Sean Lenning (16), 4, 6, in singles and winning the doubles with Emmett Peixoto, 12, 17, over Lenning and Nik Nahorniak.

The win capped an impressive performance by Moreno who didn’t give up double digits to any of his opponents in the first three rounds before dropping the first game to Lenning in the final.  From that point on, everything went right for Moreno as he never allowed Lenning into the second game, unleashing a wicked serve and making incredible retrieves for a quick victory.  In the tiebreaker, Moreno built and maintained a small lead to close out the match, 11-6.

Thanks to Classic Director Charlie Keller for providing updates and scores.