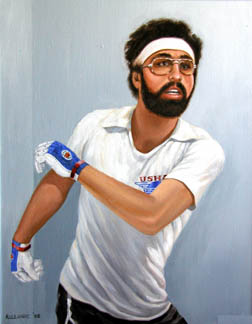 “Steady” Freddy Lewis won his first national title in 1972 and it was considered an upset at the time. But Lewis pulled off five more singles wins to become one of the game’s most durable champions. Fred dominated the action on the early pro handball tour, which started in 1974. Lewis topped the all-time prize money list for more than a decade.

Fred personified the “percentage handball” game, and coupled that with the ability to defend from deep court and convert any rally-ending opportunities.