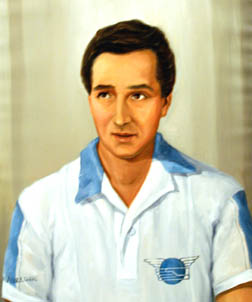 Dennis Hofflander may have the game’s best two-handed shooter. Hofflander made his first mark on USHA history by destroying the National Juniors field in 1963. No opponent scored more than five points against Dennis and the event featured other future greats, including Fred Lewis. After a stint in Vietnam, Dennis made his handball comeback by placing second in the 1974 Nationals. Dennis won the very next pro stop and went on to take second in the next two national championships.

A fierce competitor, Hofflander was all business on the court but a clean, fair player. He was called first true “pro handball player,” because it was the prize money that drew him back into the game after his tour of duty. Dennis learned the game on the south side of Chicago, where he became a firefighter.