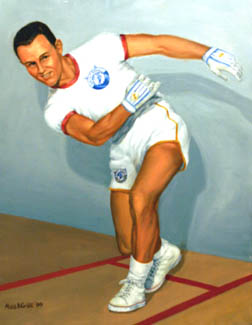 One of the quickest and most ambidextrous players ever to grace a handball court, Bill Yambrick earned three YMCA singles titles. Yambrick might be best known for finishing second to Paul Haber in three USHA singles finals. Also known as one of the nicest men in handball, he stood in contrast to Haber’s brash personality. Throughout the 1960s, Yambrick played in hundreds of tournaments, conducted numerous clinics, including a trip through Canada on behalf of the Canadian government. In addition to his talent, Yambrick will be remembered as a true sportsman.