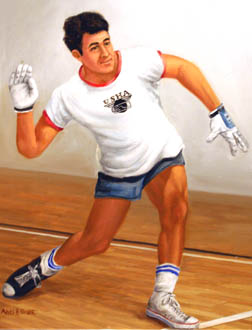 In spite of a right leg weakened and disfigured by childhood polio, Arty Reyer became a doubles standout, winning six USHA national doubles titles with four different partners over a span of 16 years. Reyer brought a flair to every game he played with quick movement, incredible reflexes, anticipation and the sharpest of handball minds.

The 16 -year span of Open titles doesn’t give due to Reyer’s longevity. He was the only 50-plus play to win an Open title and won masters titles in the same years as the Open on four occasions.