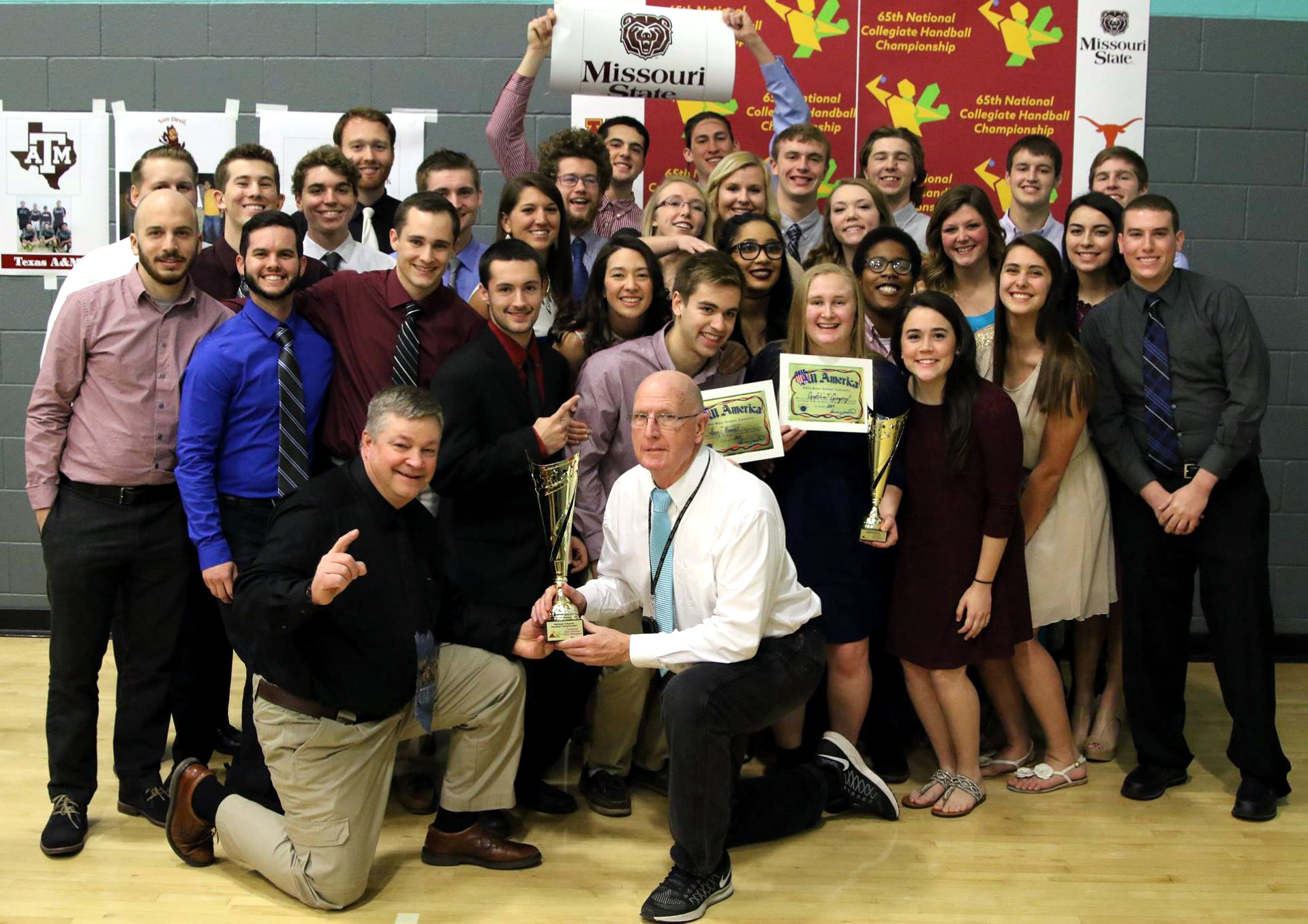 TEMPE, Ariz. — Sunday’s matches wrapped up a tremendous 65th USHA Collegiate National Championships at Arizona State.  The ASU Sun Devil Handball Club was recognized as the USHA Organization of the Year on Saturday night, and they delivered an exceptional event.  University of Florida’s Michael Morgan was honored with the USHA Coach of the Year award.  Lake Forest’s Ricardo Palma and Juan Canales were awarded the John C. Sabo Scholarships.

After the banquet, collegiate players and coaches enjoyed an after party with pool, table tennis and cyber bowling in Sparky’s Den at the Student Union.

In Sunday’s finals, Trinity College Dublin’s Ciara Mahon dominated all opponents during the week to win her first Women’s Open Singles title defeating Limerick’s Niamh Dunne, 21-15, 21-9..  The win denied University of Limerick’s chances to sweep the singles.  Mahon jumped to big leads in both games and cruised to the title despite a late-game surge from Dunne in the first game.

In the Men’s Open final, University of Limerick’s Colin Crehan found a higher gear whenever challenged by Leo Canales of Lake Forest winning 21-10, 21-11. Canales fell behind in both games but pushed back by executing some tough serves and timely passes to keep the score relatively close.  During one of Canales’ streaks, a late timeout in the second game spelled Crehan who came back in to close out the remaining points needed for championship point.

Pacific University won the Combined A team title over University of West Florida.

Click on the links below to see team scores.

Sorted by School and Name

The new naming conventions will be broken into Open, A, B, and C Divisions for the men and women draws. Each Division will contain a number of brackets based upon the number of players in a division.

To categorize teams for Open, A, or B team titles, you would take the AVERAGE of the players’ seeds. For the 2015 men’s draw, to find the three Divisions you would divide the total number of entrants by 3, e.g. 162 entrants / 3 = 54.

To qualify for a team title, a school would still need to have a minimum of three players in a gender. Points would be calculated exactly how they were in 2015. The schools would have been divided as follows in the Men’s 2015 tournament using this method.

It was a topsy-turvy Friday in from the Men’s Open to the Men’s C3 division as upsets happened across the board.  While top-seeded Colin Crehan (Limerick) was not one of the casualties, others were knocked out in the first round and quarterfinals.  Luis Bustos (Minnesota State-Mankato) upended third seed Anthony Collado (Lake Forest) in the first round with an 11-6 tiebreaker victory.  In the same half of the bracket, Leo Canales (Lake Forest) stopped second seed Tyler Stoffel (Minnesota State-Mankato) in two games, 21-10, 21-18.  Canales faces Sam Esser (Missouri State) in the semifinals on Saturday.

Esser produced the match of the day earlier, fighting off match point and scoring three-straight points to defeat Seamus Conneely (Limerick) 19-21, 21-8, 11-10.  Click on the draws below to see Friday’s results.

The atmosphere remained electric with teammates cheers and applause ringing through the rec center while players battled on the courts.  Thanks to Red Bull Energy Drinks and Jimmy John’s Sandwiches for supplying products and samples for the tournament.  Red Bull has a connection with handball by sponsoring the Annual Red Bull Slaps each summer in New York City (also see Red Bull’s The History of Handball in 77 Seconds).  The National Collegiates will continue through this weekend with singles and doubles finals wrapping up on Sunday.