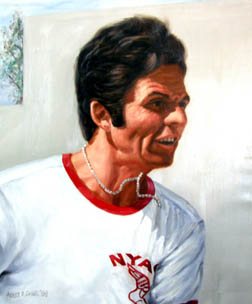 The lefthander in the famed Obert family of handball champions (joining brothers Oscar and Ruby in the Hall of Fame) Carl amassed an amazing singles and doubles record. A student of the game, Carl also dominated with his speed, hooks and tenacity. Growing up as a one-waller, Carl excelled at three-wall as well and then became one of the few men to win titles at one-, three- and four-wall. Playing doubles with Ruby, Carl won the USHA one- and four-wall titles as well as two national three-wall singles titles.