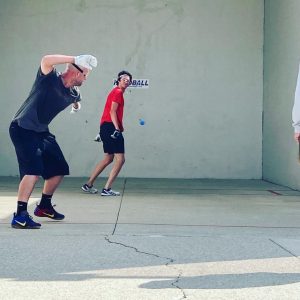 MAUMEE, Ohio — Sunday and Monday were full of finals matches in all divisions. The weather continued to be sunny and 75 degrees for perfect championship weather.

Sean Lenning and Daniel Cordova played the Men’s Open Final in front of a packed crowd at the Lucas County Rec Center. The crowd saw what they have been seeing for many years: Lenning domination. His serve was nearly unreturnable and if Cordova was able to get a hand on it Lenning punished the return. He cruised to the victory 21-5, 21-3 for his 12th open singles national title, a record he continues to add too.

In the Men’s Open Doubles Final, Shorty Ruiz and Sam Esser denied Sean Lenning the slam by defeating him and his partner Abraham Montijo by the scores of 21-17, 21-15.

The Women’s Open Singles final featured number one seed Danielle Daskalakis and two seed Ashley Moler. Daskalakis played like she was on a mission to bring home the title all weekend and that did not change in the final. Between her hop serves down the left and her consistent corner kills in the front she was too much for Moler to handle, and won 21-8, 21-11.

Moler was able to get some revenge in the Women’s Open Doubles Final when she and her partner Mikaila Mitchell defeated Daskalakis and her partner Jennifer Schmitt 15-21, 21-15, 11-6.

On the Big Ball side, Brian Medina and Sergio Guzman came in as the seven seed and shocked the draw by winning three consecutive tiebreakers to take home the title in the Men’s Open 3-Wall Big Ball Doubles division.

In the Men’s Open One-Wall Doubles division, Timbo Gonzalez and Richie Vera won the round robin format without dropping a game the whole tournament.

Check out the results of every division on R2Sports by clicking HERE.

MAUMEE, Ohio — Saturday morning at the Three-Wall National began with a lesson: That you should never give up. That’s because Dale Ziegler won his first ever national title and he did it in the 80 plus singles division (the oldest division offered) over Norm Young.

The Women’s Open also began on Saturday morning with Mikaila Mitchell edging Kristen Hughes in a hard fought tiebreaker match. Mitchell moves on to face number one seed Danielle Daskalakis in the semifinals.

On the bottom half of the bracket, Ashley Moler brought her “A” game and defeated Leah Kirk in two games, 21-2, 21-5. Moler moves on to the other semifinal to face Megan Dorneker, who took out Jennifer Schmitt in her Quarterfinal matchup 21-3, 21-9.

The Men’s Open began their semifinals with defending champ Sean Lenning surviving a close first game with Max Langmack before finding his serve and cruising to victory in game two to win the match 21-16, 21-7. Lenning will face Daniel Cordova in the final Sunday morning.

Cordova played one of the most exciting matches of the tournaments in his semifinal against Shorty Ruiz. Ruiz fought off a couple of game points in game one to take it 21-20. Cordova and Ruiz came out very even at the beginning of game two before Cordova found his groove at 12-12 and pulled away to win 21-13 and force a tiebreaker.  Cordova was able to outlast Ruiz by using his hop serve and conditioning to win 11-7. Cordova and Lenning will play for the national championship at 12am eastern time Sunday.

The Men’s Open Doubles Quarterfinals began today with all the higher seeds advancing. Sean Lenning and Abraham Montijo will take on Dane Szatkowski and Bill Mehilos in the top half of the bracket while Shorty Ruiz and Sam Esser will face Daniel Cordova and Allan Sanchez on the bottom half.

You can follow all the action on R2Sports by clicking HERE. Stay tuned for many finals results tomorrow!

MAUMEE, Ohio — The weather couldn’t have been nicer for days one and two of the USHA Three-Wall Nationals. Players arrived Thursday and Friday to the Lucas County Rec Center in beautiful 75 degree weather. The Toledo Handball Club’s famous hospitality was on full display for all participants and spectators.

The quarterfinal’s of the open kicked off Friday morning with number one seed and defending champ Sean Lenning taking out the young and talented Jon Guttierez 21-3, 21-4.

Lenning will continue his title defense against Max Langmack in the semifinals who edged out Abraham Montijo with his aggresive serve and shoot style 21-11, 21-19.

On the bottom half of the bracket Shorty Ruiz defeated California’s Brian Medina in two games 21-4, 21-15. Ruiz will face Daniel Cordova tomorrow in the other semifinal.

Follow along with all the brackets at R2sports by clicking HERE.

Draws and start times have been posted for the USHA Three-Wall Nationals. You can view them on R2sports by clicking HERE.

Please note that draws and start times are tentative, and you should continue to check up to the day of your match for any updates.

We missed you! This is everyone’s the favorite event of the year, every year (except 2020), and the Toledo Handball Club promises to offer another prime event!

For your time off the court, the Toledo Area has plenty to offer. CLICK HERE to see Toledo Attractions.